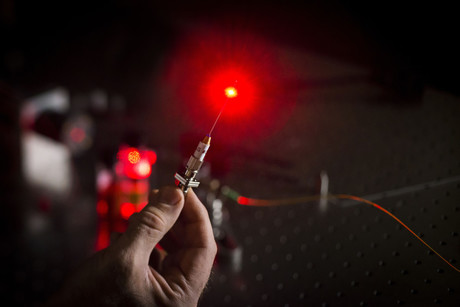 A new high-tech medical device to make brain surgery safer has been developed by researchers at the University of Adelaide.

The tiny imaging probe, encased within a brain biopsy needle, lets surgeons ‘see’ at-risk blood vessels as they insert the needle, allowing them to avoid causing bleeds that can potentially be fatal. The project is a collaboration with the University of Western Australia and Sir Charles Gairdner Hospital.

“We call it a smart needle. It contains a tiny fibre-optic camera, the size of a human hair, shining infrared light to see the vessels before the needle can damage them,” said Professor Robert McLaughlin, chair of Biophotonics, Centre for Nanoscale BioPhotonics, at the University of Adelaide.

“And what’s really exciting is the computer smarts behind this so that the computer itself recognises the blood vessel and alerts the surgeon.”

Over the past six months, the ‘smart needle’ has been used in a pilot trial with 12 patients undergoing neurosurgery at Sir Charles Gairdner Hospital in Western Australia.

Education and Training Minister Senator Simon Birmingham was shown the high-tech needle and the laboratory where it was developed, partially funded by the Australian Research Council, the National Health and Medical Research Council and the South Australian Government.

Minister Birmingham said the Turnbull Government had committed $23 million until 2021 to encourage vital research discoveries through the Australian Research Council Centre of Excellence for Nanoscale BioPhotonics.

“This smart biopsy device is an outstanding example of how our investment in research can translate into real benefits for industries and ultimately for Australians,” Minister Birmingham said. “Professors McLaughlin and Lind are improving lives and are exemplars of Australian ingenuity who are leading the world as innovators in medical technology.

“This truly transformational technology will make brain surgery safer and I expect in the months and years to come we will see this as one of the first in the next generation of research breakthroughs supported by the Turnbull Government’s National Innovation and Science Agenda.”

The smart needle will be ready for formal clinical trials in 2018. The team are in discussions with a number of international medical device manufacturers and are seeking to manufacture the smart needles in Australia. “It’s an ideal technology to commercialise in Australia,” said Professor McLaughlin. “We have the engineering expertise and world-class hospitals here, and enthusiasm from the surgeons.”

“To have a tool that can see blood vessels as we proceed through the brain would revolutionise neurosurgery,” said Professor Christopher Lind, consultant neurosurgeon, Sir Charles Gairdner Hospital and the University of Western Australia, who led the clinical trial. “It will open the way for safer surgery, allowing us to do things we’ve not been able to do before.”

Virtual care adoption accelerated dramatically in Australia in the wake of COVID-19. This was...

How 5G will transform health care

During COVID-19 lockdowns across the world we saw many new examples of mobile technology used...

Health care at the edge

The pandemic has exposed the healthcare industry across the Asia–Pacific region, which is...