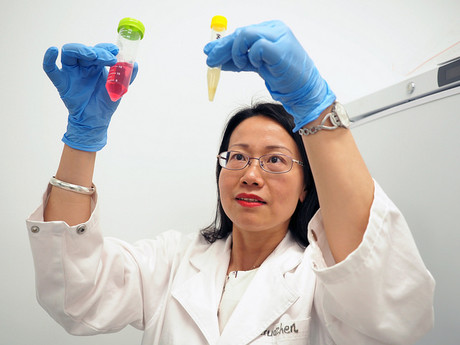 A report published in Nanoscale describes a new nanoscale sensor, designed by researchers at the ARC Centre of Excellence for Nanoscale BioPhotonics (CNBP), which allows ultrasmall amounts of cytokines to be identified in and around cells.

The sensor consists of a modified graphene quantum dot (or GQD) which has been designed by researchers at the ARC Centre of Excellence for Nanoscale BioPhotonics (CNBP).

Lead CNBP project scientist Guozhen Liu, Associate Professor at Macquarie University, explained, “The release of certain cytokines by the body is frequently symptomatic of a disease- or health-related issue, such as arthritis, inflammatory disorder or even cancer. Consequently, monitoring cytokine secretions at the cellular and subcellular level has enormous value in our understanding of basic physiology and how the body is actually working.

“What we’ve been able to do is to design and make a sensor that is so small that it can easily penetrate inside cells. Moreover, unlike other sensors it only responds when the cytokine is present.”

Professor at Macquarie University, Ewa Goldys, Deputy Director at the CNBP, also on the project team, noted that the detection of cytokines in body fluids, cells, tissues and organisms was attracting considerable attention in the biomedical research field. “Being able to track cytokine levels in real time opens new ways to monitor body physiology. This will ultimately lead to new diagnostic tools and new ways of treatment monitoring.”

Goldys believes that the innovative GQD sensing technology developed by the CNBP has potential widespread applications, due to the universal nature of the sensor design.

Although still some years away from clinical study, Goldys and Liu are both excited by the research. “Operating at the nanoscale we’re creating entirely new windows into the body and will gain valuable insights into the body, health, wellbeing and disease,” concluded Goldys.