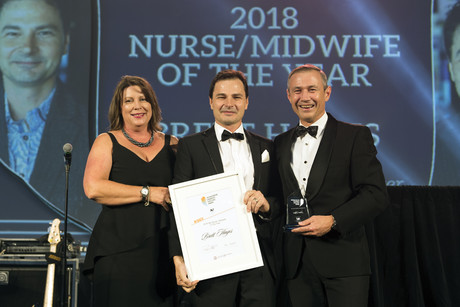 In Conversation provides a glimpse into the life of an ‘outlier’ — an exceptional person going above and beyond to improve outcomes in their field. We speak with Brett Hayes, Regional Manager for Specialist Palliative Care in the West Australian Country Health Service, who founded the TelePalliative Care Service. In recognition of his work, Hayes was awarded winner of Western Australia’s 2018 Nurse/Midwife of the Year at WA Nursing and Midwifery Excellence Awards, and won the Excellence in Rural and Remote Health category for the teleconferencing service.

Your teleconferencing program has significantly improved the lives of the Wheatbelt’s palliative patients and families. How did the program come about?

The telehealth infrastructure already existed in the hospitals. We’d been doing teleconsults for a long time, getting patients to come into a hospital for consultations with other services. The next logical step was taking it out to the community where there was clearly a need.

After three years of persuasion and insistence, we received approval for a two-year pilot program.

What did the pilot program tackle?

We wanted to see how far we could push the technology, but the real intent was to allow people to die at home. We found that 70% to 80% of our palliative patients wanted to die at home, whereas prior to the program only 7% to 14% could actually do so.

We have conducted 70 videoconferences (VCs) with 45 patients, and around 50% of them died at home. Of those who wanted to die at home, we’ve supported 74% to die at home.

How does service work?

Patients are admitted into the program via a referral from a GP, nursing staff or metropolitan team and are assessed to see if they meet the criteria for a palliative care service. We then meet with the patient face to face and have a conversation about their needs. We discuss their videoconferencing options and test out the videoconferencing (VC) program on their computer, laptop, smartphone or tablet. Subsequent consults are done via VC. If they have consults in Perth we do them via VC if the specialist agrees.

Have you experienced technology issues?

The internet has been more stable than we expected, and has improved in the past two years. There are some places that have internet black spots, the picture is pixelated or the sound is distorted. But during the two-year pilot program we did 70 VCs and only abandoned four of them due to bad picture.

What are the major challenges for palliative care in rural regions?

The main challenge is distance, particularly in the Wheatbelt where the population is spread out over a 157,000 km2 area. It can take three hours to travel to one patient, so we can’t see as many patients as we want to. We currently have around 160 palliative patients on the books, and our dedicated specialist palliative team has myself, a clinical nurse and a social worker — you can imagine that trying to see everyone is impossible.

The other challenges are lack of staff and no 24-hour service. If something happens at 2 am and the carer panics, there is no service they can contact for help. They can call the local hospital, but the best they can do is tell that patient to come in. Unfortunately, if there is no doctor present, they can’t be admitted to that hospital, which means they need to go to the next closest hospital, and so on. We’ve had issues where patients wanted to die at home but there was no support.

A lot of the patients are farmers, and their closest hospital may be an hour away. Rural patients also have to rely on family to provide 24-hour support, unlike in the cities where there are commercial nursing services available.

Since changes last year, it’s also more difficult for rural patients to get Aged Care Assessment Team (ACAT) packages, which can take up to nine months to be approved. By that time our patient has often passed away. Palliative patients are automatically not eligible for NDIS packages. So the only thing they have left is our palliative service.

What impact has the program had on your patients and families?

People were extremely grateful that they don’t have to travel. There are some patients that are so unwell that they can’t actually get out of house to the local hospital. One patient had extensive disease and it would take them an hour to just get him into the car with all his equipment. Going to the local hospital was a day’s event. We put a stop to that and did VC at home.

Other families appreciated the timeliness of the program, and that their loved one could die at home if that is what they wanted.

Are other regions seeking to replicate your program?

There are seven regions with palliative care teams and they’re all interested in establishing the program. In fact, three have already rolled it out. We’ve put together a steering committee to help support the other regions, so the program can go state-wide.

What about 24-hour support?

To date the program hasn’t cost anything, because we used existing infrastructure, but a 24-hour service takes extra money. It all comes down to funding. Everyone thinks it’s a fantastic idea but it’s tricky to get money. 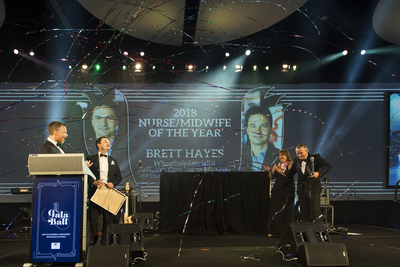 Brett Hayes being announced as the winner of the 2018 Nurse/Midwife of the Year.

The role of video and audio tech in health care

With the right technology, medical services like appointments and student learning can be...

The healthcare framework is changing as new access points to health care open up in the digital...

The future of conversational AI and health care

Technology is helping clinicians connect to patients wherever they are, while conversational...