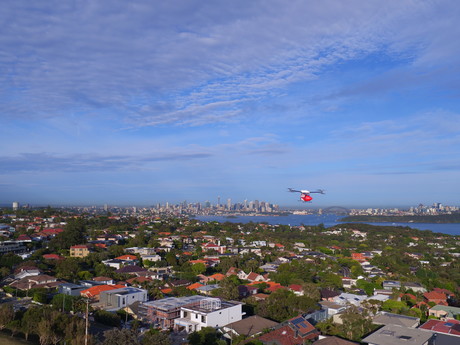 In Conversation provides a glimpse into the life of an ‘outlier’ — an exceptional person going above and beyond to innovate in their field and improve patient outcomes. In this issue our guest is Ron Bartsch, President of the Asia-Pacific RPAS (Remotely Piloted Aircraft Systems) Consortium and aviation law expert. Ron will be heading up the Angel Drone trial due to commence in rural New South Wales later this year.

You are heading up the Angel Drone trial, delivering vital medical supplies to remote communities in rural New South Wales. Can you tell me what brought you to be interested in drone technology?

I’ve been in the aviation industry for 35 years. I was originally a commercial pilot in the industry then head of safety with Qantas and worked for 12 years with the safety regulator — the Civil Aviation Safety Authority. About five years ago I became interested in unmanned aircraft, which led to me undertaking a PhD at Sydney University on the legal aspects of integrating drones into civilian usage. My supervisor on that project, Associate Professor KC Wong, is a world leader in drone technology, and together we started to look at the medical applications for drones.

My current role is CEO of Innovating Australia and an important project I am managing as President of the Asia-Pacific RPAS (Remotely Piloted Aircraft Systems) Consortium, ARC, has been to bring together the key people and stakeholders who can contribute to the Angel Drone trials with the view to achieving regulation for medical applications of drones in Australia and the Asia–Pacific region.

Dr Charles Teo, a household name in neurosurgery, has thrown his weight behind this project as the ambassador for the Angel Drone project.

Yes, as a world leader in medical innovation and technology, Charlie could see that medical drones have the potential to save time, which means saving lives. He supports Angel Drone as a positive and more beneficial use of this technology for society than perhaps drones delivering beers or pizza.

Organ transfer, natural disaster and transporting doctors and medical specialists for roadside trauma relief have been flagged as opportunities for medical drones. What is the Angel Drone trial in NSW all about?

These are all potential applications for drone technology. Some are more ambitious and require further research and more approvals than others. In the NSW Angel Drone trial we will be trialling drones to deliver supplies such as blood and organs by unmanned aerial vehicles to hard-to-reach areas. We are also working with CareFlight with the view of commencing Angel Drone trials in outback Northern Territory. Regulatory approval is the key to everything so we are working closely with CASA to demonstrate that this can be done safely and responsibly.

Due to the lifesaving potential of medical drones, we are keen to work with innovative healthcare companies and all going well with the trial, those in remote communities could expect some of these medi-drone services to be operating within 12 months.

Safety is a concern often expressed about drones flying in our airspace. How are you addressing this?

We’re fortunate that Australia was the first country in the world to have civilian regulation for drones, which means that our local civilian drone industry is quite sophisticated. We are working very closely with CASA to demonstrate that drones won’t pose a safety threat to people or property. For example, we need to demonstrate that a drone will still be able to operate with the loss of an engine, or if the data link is lost that the drone will return to a predetermined place or hover in its existing location. We are also only working with professional drone operators that have been certified and audited to international standards.

Medical practitioners and companies like CareFlight, who are experienced in aero-medical operations — including the transportation of pathology products — will ensure the integrity of the blood, plasma or biopsy samples.

Where do you see unmanned aircraft taking us in the future?

I think we could see a network of passenger carrying drones, carefully coordinated through an operations control centre that can deliver a first response paramedic or doctor to a road trauma site in a fraction of the time. I also see the delivery and transportation of human organs in jet drones travelling at beyond the speed of sound — both within Australia and internationally. Many people think I’m dreaming and I remind those people that it is almost half a century ago we landed a man on the moon and that we were flying over 100 passengers at twice the speed of sound in the Concorde. Drones’ lifesaving potential motivates me to make it happen — I haven’t the time to dream.

This sounds like an alarming idea to some people but it’s important to remember that drones have a pilot — they are just not on board — that’s why they are referred to as ‘remotely piloted aircraft systems’ or RPAS. Drones are already being used for industries such as mining and, unfortunately, war, so it’s about time we utilised that technology for the betterment of mankind and the greater societal good.

With rapid technology advancements and more complex care needs, organisations are under pressure...

Opinion: How do we do no harm with AI in health care?

AI is poised to play a significant role in the delivery of health care for all Australians, but...

Healthcare providers must pay careful attention to their cyber hygiene or find themselves facing...