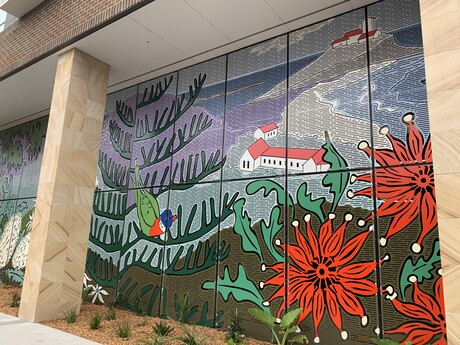 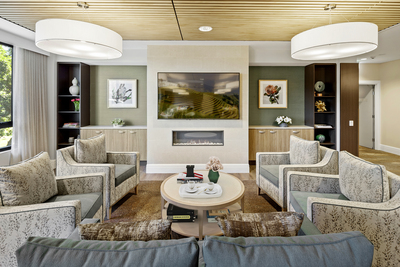 Two floors at the Birdwood Park facility are dedicated to residential aged care.

A sculpture and artworks celebrating the transformational power of valour and patriotism have been unveiled at the facility, with the central works adorning the entrance to the building and extending to elegantly decorative carpark screens, where a walkway through to the main street is proposed. 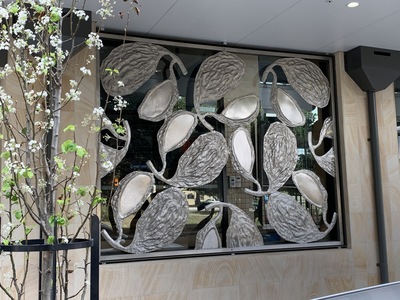 The Pod screens viewed from the street, marking the front entry to the building.

The work by internationally recognised Sydney sculptor Vivienne Lowe was commissioned on behalf of RSL LifeCare by leading commercial builder Hansen Yuncken, as a permanently striking memorial to the bravery of servicemen and women in Vietnam, exemplified by Major Peter Badcoe VC.

The central 2.5 m-high, stainless steel and glass Valour Sculpture and accompanying artworks are created from permanently beautiful materials with themes to create an enduring memorial intended to inspire the thousands who will pass by it over generations. 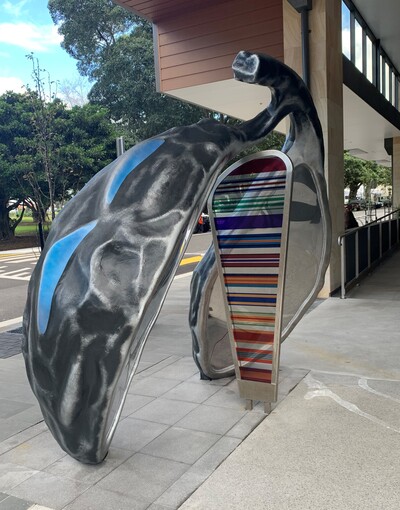 The Valour Sculpture uses the analogy of the release of a seed from a woody pod after the stress of bushfire to symbolise bravery under the stresses of war. Celebrating valour as exemplified by Major Peter Badcoe VC, the sculpture and artworks adorn the building’s frontage and side.

Lowe says in creating the Birdwood Park Valour Sculpture, she was inspired by the native Hakea seed, whose capsule is a craggy, woody and dense form which safeguards its seed. Like many native plants, it can take an extreme stress such as a bushfire for the seed pod to release the seed, thus ensuring the plant species’ survival.

“The Valour Sculpture uses the analogy of the seed pod and its release of the seed to symbolise bravery in our soldiers,” she said.

“The colours of Major Peter Badcoe’s medal ribbons are introduced in the form of the glass seed, to symbolise valour. It’s sometimes said that every now and again people ‘show their true colours’, and similarly this rainbow of colours in the sculpture symbolises a valour; a valour which is inside us all, and which can sometimes be revealed by our soldiers in extreme times, such as in war.

“Under circumstances where extremes warrant extraordinary behaviour, it can manifest as heroic actions, such as in Major Badcoe’s deeds in the Vietnam War. The outer shell of the seed capsule sculpture is blackened as if in a bushfire, or ‘under fire’ in our soldiers’ case.

“The metallic blue highlights give the work a more contemporary, less literal look, to show it is representational. The polished mirror finish steel on the inside of the seed capsule reflects the colours of the glass ‘seed’, creating an ethereal image of ‘valour’ onto its surface. It reflects the viewer’s image as well. In many respects, for most people, the comparison of one’s own bravery, contrasting with the deeds of these servicemen, reminds us of how brave they were.”

Top image: One of the triptych screens featuring Australian native flora and local landmarks on the side of the building. The impressive work spans 22.5 m wide by 6 m high.

The healthcare industry faces the task of safeguarding patient data and implementing systems to...

When it comes to choosing the right architectural solutions for healthcare buildings, flexibility...

Getting COVID-19 vaccines to the Australian population comes with huge supply chain challenges.

Tick-transmitted brain disease may be treatable

Beer waste gets a second life

Optus $200K grant to be split among five Aussie innovators