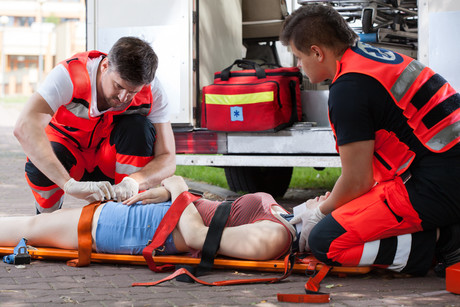 Paramedics using manual instead of powered stretchers could be at 78% increased risk of injury according to a study from the University of Waterloo, Canada.

The study, published in Applied Ergonomics, found that paramedics who had access to stretchers with a battery-powered hydraulic system and an assisted ambulance-loading feature experienced significantly fewer musculoskeletal injuries on the job.

Steven Fischer, assistant professor of kinesiology at the University of Waterloo, explained, “In many cases, paramedics face spine compression that is well above the threshold limit.

“A manual stretcher alone can weigh nearly 100 pounds. Add on a 200-pound patient and a paramedic team is handling 300 pounds every time they raise, lower, lift or load the stretcher,” he said.

Professor Fischer continued, “For paramedics, lifting and loading is a common element to almost each and every call. We estimate that a paramedic is lifting more than 1700 pounds per shift on average, approximately the same weight as moving all of the furniture in a one-bedroom apartment.”

The study compared injury rates at Niagara Emergency Medical Service, which had implemented powered stretchers at the time of the study, with Hamilton Paramedic Services, which used manual stretchers.

One year after introducing powered stretchers, stretcher-related injuries among Niagara paramedics dropped from 20 injuries in 100 workers per year to 4.3. In Hamilton, injuries increased from 17.9 injuries per 100 workers to 24.6 over the same period.

“We found that the added cost to purchase power stretchers and load systems would be recovered within their expected seven-year service life due to the reduction in injury-related costs,” said Daniel Armstrong, the study’s lead author and a graduate student in the department of kinesiology.

Paramedics experience the highest incidence of work-related injury. Data from the Ontario Workplace Safety and Insurance Board indicates the incidence rates among paramedics are nearly five times higher than rates in any other sector.

Hummingbird House is a state-of-the-art children's hospice with an empathic and human-centred...

We take a look at a small selection of the healthcare products that showcased at the 2020 Good...