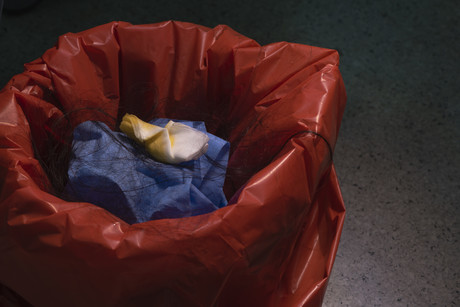 When we examine the effects of waste on our lives and the environment, one type of waste is often overlooked: hospital waste confers a huge impact on the environment and a potential threat to human health. This study examined the volume of waste from an Australian hospital’s operating theatres.

Reports indicate that in the USA alone, 4 billion pounds (1,814,369,480 kilograms) of waste is generated annually by healthcare facilities with up to 70% of this coming from operating theatres.1 In many countries, clinical waste is often steam treated (decontaminated) and dumped in landfill.2 Although considered safe, it represents a significant environmental burden. The material of many waste objects such as surgical drapes (and others) — polypropylene (PP, also known as polypropene) — does not biodegrade and thus takes centuries to decompose naturally.3

In some Australian states, incinerating hospital waste is a common method of disposal; however, this can be even worse than if the waste is stored in landfill.4 While incineration kills most microorganisms and significantly reduces the volume of waste,4 the technique can release significant amounts of harmful emissions into the atmosphere, especially dioxins, furans and mercury.5 In addition to these disposal and degradation challenges, the sheer volume of hospital waste (for example, surgical drapes, plastics, cotton, latex, etc, and contaminants such as human tissue, blood, bacteria, viruses, prions, drugs, heavy metals, chemicals, drugs, etc) causes a significant economic burden for authorities. This can be further complicated and dangerous when the waste includes cytotoxic contaminated waste from oncology services in hospitals/clinics.

Due to its large volume, complex composition and potentially toxic nature, hospital waste is expensive to treat and remove.6,7 Waste items have been categorised and several studies have tried a range of techniques to reduce its volume.6,8

The purpose of this study was to gain an understanding of the amount and type of waste generated in the operating theatres of a large, tertiary referral hospital in regional Australia, to provide an at least superficial description of the waste from hospitals that creates an enormous financial and environmental burden.

This observational study was done in two parts:

The aim was to provide data about what goes into the waste in operating theatres and provide a cursory description of its composition.

The hospital is a large, tertiary referral hospital in an Australian regional city. It provides a wide range of surgical procedures, except for the most complicated neurosurgery, and transplant surgery. There are 12 operating theatres, and the hospital takes patients from across their lifespan. The waste is collected and treated according to the recommended guidelines, removed from the operating theatres to a holding bay, from where it is collected by a waste management company for deposition into the local council waste management plant. There it is steam treated, compacted and placed in a large pit, as part of the full waste load of the hospital.

In an operating theatre, at the end of an operation, and after the final count of all items that require the count check, everything that is used is disposed of into either large plastic garbage bags or, for sharp items, into specific sharps disposal containers, and, if cytotoxic drugs have been used, into specific containers for disposal of those items. Everything else is collected into plastic bags and removed from the theatre before the cleaning begins in preparation for the next surgery. If the operation is small, for example, insertion of grommets into a child’s ear, there will be one or two bags of rubbish. If it is a very complicated and lengthy operation, the numbers of waste bags can increase into the hundreds.

For one week, an experienced perioperative nurse (co-author Allana Bryan), attended a series of operations that were representative of the full range of procedures undertaken at the hospital and recorded everything that was thrown into the garbage bags during each operation. Where possible, the resulting list was supplemented by manufacturers’ details of all the items. That list was then studied by a chemist (co-author Clare Flakelar) who, by examining websites, by going over material datasheets supplied with the items or by contacting manufacturers, created a list of the component parts of each item thrown into the rubbish.

Table 1 shows the list of items that were dropped into the plastic garbage bags for removal. It was not possible to count the numbers of bags being filled, or to actually count the items as they were bundled up and thrown out as soon as one operation was finished, to make way for the next one. However, Table 1 shows that the list is highly varied and lengthy.

Table 2 shows the composition of the observed items.

The problem of waste received significant attention in Australia after the ABC aired the TV series War on Waste.9 As waste from health services was not included in the program, the series initiated the current investigation into the enormous amount of waste generated in hospitals, clinics, dental surgeries, veterinary practices and other places where any sort of health care is delivered. Two of the authors are perioperative nurses, who are greatly alarmed by the amount of waste generated during surgical operations, prompting the decision to try and investigate the type of waste thrown out in operating theatres. While there is a need for single-use items during surgery, it is obvious that the amount of waste is disproportionate to the requirement for single-use items. Table 1 shows an alarmingly long list of items disposed of over a period of just one week. More concerning was the breakdown — albeit our analysis was limited due to health and safety concerns — of the waste. Plastics of all kinds constituted much of the waste products. This is similar to the results reported for two large hospitals in the state of Florida, USA,10 and is probably not surprising, given the ubiquity of plastics in the world today.

There are some limitations to this study; its superficiality, inability to quantify the amount of waste thrown out, the fact that it was done in only one setting — operating theatres, and that we have not sought to replicate or validate the study in any other healthcare setting. Regardless, this study will alert health professionals about the general issues surrounding hospital waste. Given most of the waste ends up in landfill,1 with problematic chemicals potentially leaching into soil and groundwater,2 it is time for people working in any healthcare situation to think about the validity of single-use products, of recycling11 and of better ways to cut down on the number of items that are used when delivering health care.

The authors thank CSU Sustain for the funding to undertake this study.

The road to net zero emissions in health care

Health care will face substantial challenges transitioning to a net zero future, but those...

Neo-Bionica, a joint venture between The Bionics Institute and The University of Melbourne, is an...