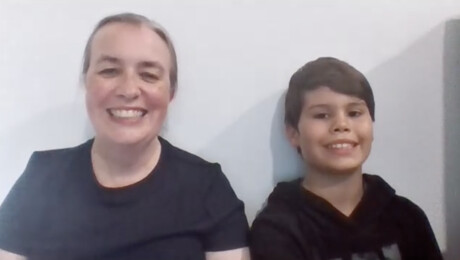 When 10-year-old Taylor walked into the Queensland Children’s Hospital with a broken thumb he was full of apprehension.

“He needed his cast changed and then eventually removed, and the fear of not knowing the process really affected him,” she said.

Taylor went from a state of anxiety to telling his mum that it wasn’t so bad, explaining he could go through with it all, thanks to the hospital’s Orthopaedic Technician, Andy Sullivan.

“You hear about the neurosurgeons and paediatric specialists and all of the amazing work the in-demand health staff do, but for us Andy is an unsung hero,” Katherine said.

Andy has been recognised as part of Juiced TV's Super Hero Awards, sponsored by QSuper, after being nominated by Taylor for the way he treated his broken thumb.

“What impressed me was that Andy didn’t speak over Taylor’s head to me. He actually chose the words and the descriptions of what was going to happen so that Taylor completely understood,” Katherine said.

“Taylor knew how to hold his hand like he was holding a Coke can so that it would be positioned correctly; he knew what he had to do to look after his arm in a cast and why that was important.”

Katherine found the whole experience reassuring and comforting and is pleased that through the awards program she could recognise Andy’s contribution to Taylor’s health care.

“A lot of people wouldn’t think about orthopaedic technicians when they think about the hospital, but it’s such an important role and it makes such a difference to the kids.

“All of these conversations Andy had with Taylor, and it was so refreshing for him to be at the centre of his own care. He made it his mission to remove the fear factor,” she said.

The Super Hero Awards Program was designed to shine a light on medical and support staff — the doctors, nurses, volunteers and others — who selflessly dedicate themselves to the wellbeing of others.

Working in partnership, QSuper and Juiced TV have helped recognise 17 practitioners through the program.

Andy said his career has taught him a lot about attitude and a patient-centred approach. “You have to treat people with respect and dignity no matter who they are — if they’re a young child with their first broken bone or a sports person on to their umpteenth,” Andy said.

“My nomination was a big surprise, out of the blue, and I really appreciate Katherine and Taylor thinking about how I’ve looked after Taylor.”

Taylor is now cast-free with full ability in his thumb, and without fearing going to the QCH if ever he needs to in the future.

How this hospital halved its code blacks

It used to be a familiar scene for Emergency Department Director Prof. Paul Preisz. A psychiatric...