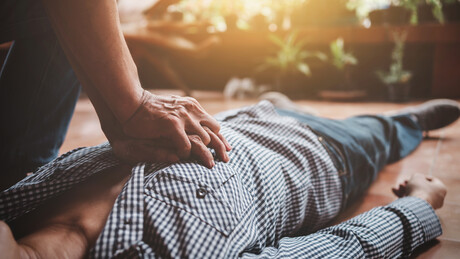 Jessica Maris was feeding her baby when her husband Bryan, 31 and a keen cyclist, suffered a sudden cardiac arrest (SCA) in bed. In a bid to expose the immense grief many thousands of Australian families are subjected to each year while the causes of SCA remain a mystery, Jessica shared her story at the inaugural National Summit for Cardiac Arrest held in Canberra in June. She hopes more can be done to understand and prevent cardiac arrests in the future.

As a cardiologist practising at St Vincent’s Hospital Melbourne and PhD Fellow, Baker Heart & Diabetes Institute, Dr Elizabeth Paratz shares the pain and understands the importance of solving this mystery and improving survival. It is with this intention in mind that Australia’s first sudden cardiac death (SCD) registry and genetic database project — led by Head of Sports Cardiology at the Baker Institute Associate Professor Andre La Gerche and Professor Christopher Semsarian — kicked off in April 2019.

A registry to better understand the condition

Funded by the EndUCD.org Foundation — in memory of Ross Dennerstein, a pilot and father of three who suddenly died in his late forties due to cardiac arrest — the project aims to serve as an important resource to researchers investigating the causes and potential treatments for SCA. The End Unexplained Cardiac Death Registry records all episodes of SCA occurring in Victorians aged 1–50 years old.

“We combine ambulance, hospital and forensic data to evaluate rates of SCA, causes, circumstances, potential preventability and variations in care. We also offer state-of-the-art screening to affected families who wish to have their heart health checked, access psychological support or participate in our genetic biobank.

“We currently have over 2000 patients included in the registry and 16 papers written to date. We hope to increase the number of families we are seeing in the post-COVID era and expand the number of insights we have made,” said Paratz.

Approximately 20,000 Australians are affected by SCA each year and unfortunately 90% of people who suffer an SCA will die, with 2000 of them being under the age of 501.

Sudden cardiac deaths come with two large costs: in the form of untold grief to the thousands of families left behind each year and nearly $2 billion annually to the economy2.

At the inaugural National Summit for Cardiac Arrest in Canberra in June, the alliance members — under the tagline “a race to save lives” — called for the development of an urgent strategy to encourage governments to prioritise funding in key areas. These include: education and awareness for bystanders — increasing the survival rate by helping more people understand how they can try to restart a person’s heart should they be a bystander to a cardiac arrest; understanding who is at risk and how it can be prevented — a greater commitment by governments to fund research that will unlock the mystery behind the cause of sudden cardiac arrest, leading to better prevention.

There are a range of red flags that suggest elevated SCA risk, Paratz said. For those who have a diagnosed heart condition, have symptoms of chest pain, unexplained shortness of breath or blackouts, it would be an excellent idea to see a cardiologist, she said, noting that for those who have had a first degree family member (that’s a parent, sibling or child) die aged under 50 from a heart problem, it would be worth discussing this with the GP or a cardiologist to ensure they are not at higher risk.

In older people the cause is most likely to be a heart attack where a coronary artery suddenly becomes blocked, according to the alliance. These generally occur on a background of known risk factors. In middle-aged and younger people there are several causes of SCA that are not reliably identified by risk factors. Genetics is a factor but sometimes the cause remains unknown.

It is, however, important to note that the majority of SCA cases occur in young people who did not have cardiac risk factors or symptoms, and this is what makes prevention particularly challenging, reminded Paratz.

Although many questions about SCA remain unanswered there are a range of preventative therapies. “Some people who are recognised to be at higher risk might be on medications that reduce their risk of an SCA,” Paratz said.

“Other people might undergo interventional procedures (for example, ablation of an abnormal rhythm or removal of excess heart muscle blocking the exit of blood from the heart). Finally, some people who are recognised to be at very high risk of an SCA might have a defibrillator implanted, which is a small device that will shock the heart if the person goes into cardiac arrest.”

Reflecting on where Australia stands compared to other countries in terms of SCA programs, practices and funding, Paratz said, “In Australia, we have some world-leading resources. Firstly, our ambulance services are not only providing frontline care to people experiencing cardiac arrest, they are also leading the world in developing comprehensive and innovative research programs. Our forensic documentation and resources are also excellent. Our registry puts this all together along with hospital resources to examine the full spectrum of clinical care.”

Unfortunately, however, nine out of 10 people who suffer cardiac arrest still end up dying, so how can we improve survival rates? “Our survival rates are amongst the best in the world, but that still means thousands of young people are dying each year. Everything we can do to chip away at number is of the utmost importance,” she said.

Hopefully, with a focus on personalised medicine and cardiogenetic investigations, we can continue to identify the causes underlying cardiac arrest in more cases, opening up the possibility of proactive prevention of young deaths, Paratz concluded.

A new report based on actual clinical experience sheds light on the factors that track with...