Clue to how cancer cells spread 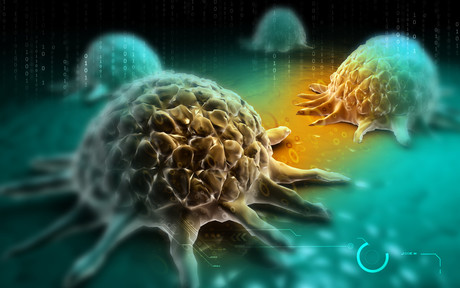 In a second human case, a Yale-led research team has found that a melanoma cell and a white blood cell can fuse to form a hybrid with the ability to metastasize. The finding provides further insight into how melanoma and other cancers spread from solid tumours with implications for future treatment.

The study was published on 27 January in the journal PLOS ONE.

Cancer turns deadly when malignant cells spread from a primary tumour to other organs and tissues. Building on a theory first proposed more than a century ago, senior research scientist and study author John Pawelek collaborated with colleagues at the University of Colorado Anschutz Medical Center and the Denver Crime Laboratory to examine how cancer spreads from solid tumours.

The research team analysed tumour biopsies from a patient with malignant melanoma who had received a bone-marrow transplant before developing cancer. They compared DNA from the primary melanoma and from lymph nodes where the cancer had spread. In both sites, they found a mixture of patient and donor DNA.

The presence of the mixed patient-donor DNA strongly suggests that white blood cells that normally attack cancer cells instead fused with them, forming a genetic hybrid that then spread, said Pawelek, who is a member of Yale Cancer Center. “The cancer cell and white blood cell DNA were mixed into the same nucleus. The hybrid has both the white blood cell propensity to move into lymph nodes as well as the dividing characteristics of the primary tumour.”

The current study confirms an earlier finding, published by Pawelek and colleagues in 2013, that also detected hybrid cells in a metastatic melanoma patient who had received a bone marrow transplant. Studying transplant patients allows researchers to distinguish sources of DNA.

The finding points to fusion as a target for new cancer therapies. “We need to focus on how fusion between white blood cells and cancer cells actually occurs,” Pawelek noted. “There are a lot of steps involved in that process and those steps are all vulnerable to targeting.”

Future therapies could aim to either prevent fusion of cells derived from bone marrow, for example, or limit the integration of fused genes into hybrids. Research focused on such pathways could produce new techniques for targeting the metastasis process itself, the researchers said.

This article was originally published by Newswise.