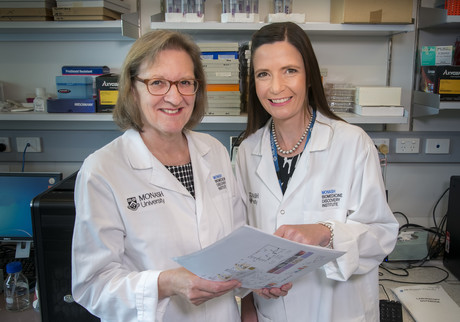 A landmark study, led by Monash University’s Biomedicine Discovery Institute (BDI) with the involvement of the Peter MacCallum Cancer Centre, has revealed the reason why men with a family history of prostate cancer who also carry the BRCA2 gene fault have a more aggressive form of prostate cancer.

The study, published in Nature Communications and involving a consortium of Melbourne and Toronto researchers and clinicians, reports that the molecular profile of the prostate cancers in men with the BRCA2 fault is similar to the profile seen in patients with advanced cancer, explaining why — right from diagnosis — BRCA2 patients have a poor outcome.

The international team of scientists, led by Professor Gail Risbridger and Dr Renea Taylor from BDI and Dr Rob Bristow from the Princess Margaret Cancer Centre in Toronto, worked in collaboration with clinicians from the Peter MacCallum Cancer Centre, kConFab, Austin Health and the Olivia Newton-John Cancer Centre to unlock the secrets of why prostate cancer in BRCA2 men behaves aggressively.

This study, part of a larger Victorian Cancer Agency-funded program of translational research, had previously reported that men who carried the BRCA2 gene fault were at a higher risk of having a more aggressive form of prostate cancer if a cell pathology known as IDCP (intraductal carcinoma of the prostate) was present; the IDCP cell pathology predicted these men were much more likely to have a poor clinical outcome.

The reason why this happens is now clear. Following surgery to remove the cancerous prostate, the patient’s specimen was made available to the laboratory for genomic analyses. Surprisingly, the study showed that these early, untreated prostate cancers were genetically similar to cancers that are usually seen in men with more advanced cancer that has spread to other parts of the body. This was in contrast to the cancers seen in men who don’t carry a BRCA2 gene fault and who rarely have cancer spread at diagnosis. This was confirmed when compared to data from a companion study, published at the same time in Nature and led by the Toronto group, which looked at prostate cancer tissue samples from more than 320 patients with prostate cancer who don’t carry a BRCA2 gene fault.

Put together, these studies identified why the presence of the BRCA2 gene fault led to markedly different clinical outcomes, with the disease progressing rapidly in this group of men.

“This study shows how different these tumours are from ‘regular’ tumours and emphasises the importance of men knowing if they have a family history of prostate, breast or ovarian cancer in their family and may carry the BRCA2 gene fault,” Professor Risbridger said.

Fellow Monash BDI lead author Dr Renea Taylor highlighted that these findings prompt the need to think about whether these men should be managed differently.

“As the tumours in men with the BRCA2 gene fault are so different from the get-go, our findings raise the question about whether these patients should be managed differently at diagnosis,” Dr Taylor said.