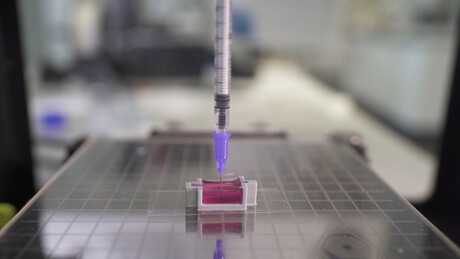 Scientists from UNSW Sydney have developed a ceramic-based ink that may allow surgeons in the future to 3D print bone parts complete with living cells that could be used to repair damaged bone tissue.

Using a 3D printer that deploys a special ink made up of calcium phosphate, the research team developed a technique called ‘ceramic omnidirectional bioprinting in cell-suspensions’ (COBICS), which enables the printing of bone-like structures that harden in a matter of minutes when placed in water.

UNSW School of Chemistry researcher Dr Iman Roohani said although 3D printing of bone-mimicking structures is not a new concept, this is the first time such material has been created at room temperature — complete with living cells, and without harsh chemicals or radiation.

“This is a unique technology that can produce structures that closely mimic bone tissue,” he said.

“It could be used in clinical applications where there is a large demand for in situ repair of bone defects such as those caused by trauma, cancer or where a big chunk of tissue is resected.”

Associate Professor Kristopher Kilian who co-developed the breakthrough technology with Dr Roohani said the fact that living cells can be part of the 3D-printed structure, together with its portability, make it a big advance on current state-of-the-art technology.

He explained that, up until now, making a piece of bone-like material to repair the bone tissue of a patient involved first going into a laboratory to fabricate the structures using high-temperature furnaces and toxic chemicals.

“This produces a dry material that is then brought into a clinical setting or in a laboratory, where they wash it profusely and then add living cells to it,” Professor Kilian said.

“There are currently no technologies that can do that directly.”

In a research paper published in Advanced Functional Materials, the authors describe how they developed the special ink in a microgel matrix with living cells.

“The ink takes advantage of a setting mechanism through the local nanocrystallisation of its components in aqueous environments, converting the inorganic ink to mechanically interlocked bone apatite nanocrystals,” Dr Roohani explained.

“In other words, it forms a structure that is chemically similar to bone-building blocks. The ink is formulated in such a way that the conversion is quick, non-toxic in a biological environment and it only initiates when ink is exposed to the body fluids, providing an ample working time for the end user, for example, surgeons.”

He said that when the ink is combined with a collagenous substance containing living cells, it enables in situ fabrication of bone-like tissues which may be suitable for bone tissue engineering applications, disease modelling, drug screening and in-situ reconstruction of bone and osteochondral defects.

“This advance really paves the way for numerous opportunities that we believe could prove transformational — from using the ink to create bone in the lab for disease modelling, as a bioactive material for dental restoration, to direct bone reconstruction in a patient,” Associate Professor Kilian said.

“I imagine a day where a patient needing a bone graft can walk into a clinic where the anatomical structure of their bone is imaged, translated to a 3D printer and directly printed into the cavity with their own cells.

“This has the potential to radically change current practice, reducing patient suffering and ultimately saving lives.”

Portable oxygen machine aiming to save one million lives

SentOx is a low-cost oxygen concentrator designed for treating COVID-19 patients in...

Researchers at New York University have come up with a preliminary AI tool that can predict where...

Black hole is even more massive than we thought

Immersive safety: the benefits of VR training in materials handling

The silver lining of cloud connectivity for gas detection devices