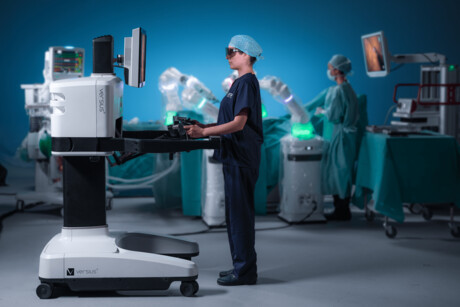 The Versius Surgical Robotic System is listed on the Australian Register for Therapeutic Goods (ARTG) for use in gynaecological, urologic and general surgery laparoscopic procedures. Being modular and versatile, the system can be quickly moved between operating rooms, allowing surgeons and hospitals to maximise the number of procedures the system can perform. Once in the operating theatre, Versius can be set up within 15 min.

Macquarie University Hospital CEO Walter Kmet said, “We continually invest in state-of-the art technology to improve patient outcomes. This is a very exciting development for Macquarie University Hospital. Our team are the first in Australia and among a number of pioneering sites in the world to offer this new, innovative type of robotic surgery.”

Brought to Australia by LifeHealthcare, the Versius Surgical Robotic System, developed by CMR Surgical, was designed using feedback from surgeons and surgical teams to address some of the major barriers to minimally invasive surgery, including limited range of movement and challenging ergonomics.

The technology has been designed to mimic the human arm, providing seven degrees of freedom inside the patient. This feature, coupled with device portability, enables flexibility in the set-up and surgical approach for each procedure. In addition, the open surgeon console has 3D vision, instrument control and a choice of ergonomic working positions, which aims to reduce stress and fatigue for surgeons and the surgical team.

Professor David Gillatt, Director of Medical and Surgical Services and a urological surgeon at Macquarie University Hospital, said, “The Versius system is easy to set up and offers improved movement and communication for surgeons. From a patient perspective, robotically assisted surgery can potentially mean reduced pain, a shorter hospital stay and faster recovery. I look forward to seeing more hospitals and patients being able to benefit from this new technology in the near future.”

Traditionally, training for laparoscopic surgery has been associated with a steep learning curve and a long training period. This has resulted in reduced uptake and, ultimately, fewer patients benefiting from minimally invasive surgery.

The design features of the Versius system have the potential to ease the education pathway, elevating access to minimally invasive procedures. In partnership with CMR, LifeHealthcare is offering comprehensive training and ongoing support for surgeons and wider surgical teams.

“Australia has always been an early adopter of new technology, making it an ideal early market for Versius,” LifeHealthcare CEO Matt Muscio said. “We are seeing strong demand for Versius and look forward to working with hospitals and surgeons to bring this transformative new technology to Australian patients.”

To ensure that all Australian hospitals have the potential to benefit from robotic surgery using Versius, LifeHealthcare has partnered with CMR Surgical to develop a number of flexible models for the introduction of Versius, supporting the ongoing adoption of the system.