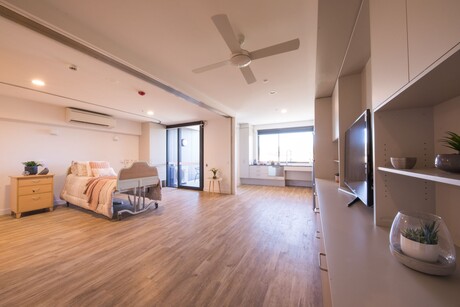 Building automation technology at MS Queensland’s Springfield Apartments has given 18 residents with neurological conditions greater independence in their everyday lives.

The residents — living with multiple sclerosis (MS) and other neurological conditions — moved into their new homes at MS Queensland’s Springfield Apartments 2½ years ago to receive appropriate care. 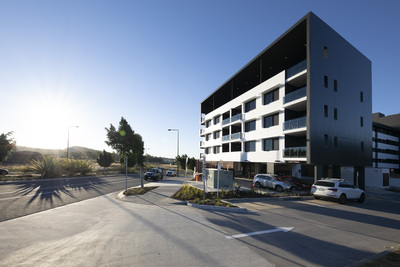 Springfield Apartments are equipped with smart assistance technology from ABB.

Each of the new apartments was equipped with ABB’s smart assistance technology. MS Queensland Executive General Manager of Services and Operations Jillian Paull said the technology has been life changing, allowing many of the residents to do more of their daily routine independently.

“One resident said she’d never been able to invite a friend over and open the front door for them, because she’d never had a front door. Now, she has privacy and can tap her tablet to open her front door whenever she’d like,” Paull said.

Each resident has a tablet suited to their dexterity that allows them to complete tasks such as operating hoists to help them get up, manipulating beds to suit their desire to relax during the day or sleep at night, operating electrical appliances, changing TV channels, as well as adjusting lighting, blinds, fans and air conditioning.

“Residents love that they can speak to their friends, family and service providers through the intercom at the street entrance then invite them in, give them access to the lift and open their own front door — all through the tablet controls,” Paull said.

Residents can operate home functions from a touchscreen.

“It’s the little things that people who don’t live with a neurological condition would take for granted, but it means so much to our residents that this technology empowers them to actively control their home environment.”

ABB i-bus KNX building automation system is wired into all electrical devices and power points in each of the 18 units at Springfield Apartments. The system integrates monitoring of circuits to measure loads, faults and electricity consumption to monitor significant changes, as this might indicate when a resident is having difficulties. When the system detects large changes in electricity consumption, it activates an alarm to alert onsite support staff.

Movement sensors installed throughout the apartments also detect whether people have left a room, opened a window, or adjusted lighting and air conditioning. This optimises energy efficiency and reduces consumption. The technology is complemented by finishes and colours to make each unit look and feel unique.

“MS Queensland wanted to make sure that the project was sustainable, and ABB i-Bus KNX can deliver up to 60% reduction in home-based electricity use, depending on the number of functions and applications that are connected,” said Christian Schiemann, ABB Electrification’s Market Development Manager for Building Automation in Australia and New Zealand.

The apartments were built as part of MS Queensland’s Project Dignity 120 initiative, which has evolved into their Best Life Project. The project is providing a solution to the current disability housing crisis in Queensland, by continuing to develop specialised disability accommodation and deliver 24/7 supported independent living services onsite to residents.

“We wanted to build accommodation that gives people choice and independence, to be able to live their best possible life. Having a home substantially increases and enhances all people’s quality of life, and for those living with a disability it makes a huge difference,” Jillian said.