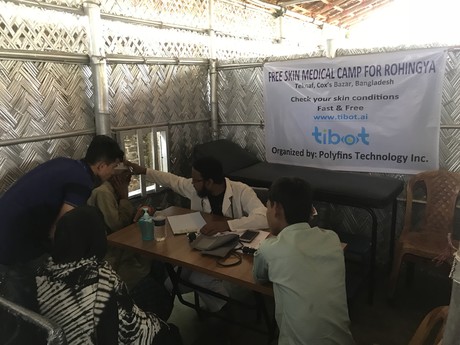 So for the more than 700,000 Rohingya refugees who’ve fled Myanmar in the past year, finding temporary shelter across the border in Bangladesh’s Cox’s Bazar district, their overcrowded, unhygienic living conditions have made them vulnerable to infections and other diseases — a problem the United Nations has called “immense”, with healthcare services “grossly under-funded.”

Help in addressing these distant needs is coming from a Silicon Valley healthcare start-up, Polyfins, whose AI-powered mobile app can help dermatologists diagnose skin conditions that often hold strong clues to underlying disease — ranging from common conditions like eczema to serious ones like tumours, infections and parasitic infestations.

Polyfins, a member of the NVIDIA Inception program, worked with Bangladeshi authorities to bring two dermatologists and several nurses to the refugee camp. The team saw around 500 patients over two days.

The dermatologists used Polyfins’ Tibot smartphone app as a diagnostic aid on one day, and used traditional diagnostic methods on the other. They found that they were able to see 25% more cases if the patients’ symptoms were first analysed by a nurse using the app.

Tibot requires users to upload an image of the skin condition and answer questions about their symptoms. The responses and a compressed version of the image are then sent to Polyfins’ server, which sends back its prediction of the top three skin conditions the user might have.

The app’s analyses allowed the doctors to see more patients at the medical camp, which in turn enabled Polyfins to distribute much-needed medication to a larger number of patients in the camp.

The AI behind the app was trained on a dataset of 100,000 images from public sources, research partners and hospitals Polyfins works with. While developing its app, the start-up collaborated with doctors to label the image data and provide guidance on identifying disease symptoms.

Based in California, with teams in India and Bangladesh, Polyfins is also partnering with dermatologists at the D. Y. Patil Hospital in Mumbai, India, on a forthcoming paper to evaluate the accuracy, sensitivity and specificity of their deep learning model.

Basar sees the tool as a more effective alternative for people who use a search engine to figure out what conditions they might have.

The team plans to add additional features to the app beyond diagnostics — such as care recommendations, virtual visits with physicians and follow-up of skin lesions over time. Polyfins’ goal is to make Tibot a complete skin management app that leverages AI.

Millennials and Gen Z are taking healthcare innovation into their own hands, bringing a new,...

A research lab to help Australian hospitals adopt and upskill with new and existing digital...

The future of health care is not in hospitals

In the past, the hospital experience was a significant part of health care, but that won't...