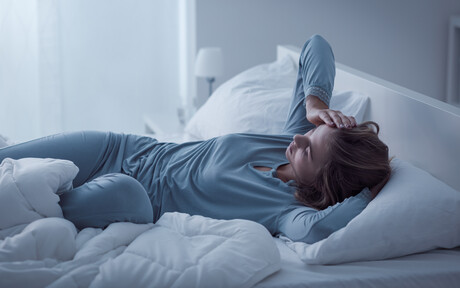 An international study of hospital workers has found that sleep quality and circadian rhythms in night shift workers was poorer than in those who worked day shifts.

Scientists at the University of Warwick, jointly with those at Université Paris-Saclay, Inserm and Assistance Publique-Hôpitaux de Paris (France), fitted French hospital workers with wearable tech to monitor physical activity and body temperature day and night.

By monitoring these workers working day or night shifts during their working and free time, the researchers have not only shown that night work significantly disrupts both their sleep quality and their circadian rhythms, but also that workers can experience such disruption even after years of night shift work.

Their findings, reported in a study in the Lancet group journal eBioMedicine, offer a detailed analysis of the sleep and circadian rhythm profiles of shift workers and their body temperatures. This key circadian rhythm is driven by the brain pacemaker clock and coordinates the peripheral clocks in all organs.

The study compared 63 night-shift workers, working three or more nights of 10 hours each per week, and 77 day-shifters alternating morning and afternoon shifts at a single university hospital (Paul Brousse Hospital in Villejuif, near Paris). Both groups wore accelerometers with chest surface temperature sensors throughout the day and night for a full week, with the data collected by the research team at Université Paris-Saclay and Inserm.

The accelerometer measured movement intensity and allowed the researchers to estimate how much sleep the participants had, how regular their circadian rhythms were and whether that sleep was disrupted by movement. Patterns in the chest surface temperature gave a further indication of the participants’ circadian rhythm, the internal body clock that coordinates rest-activity phases, varying core body temperature and an array of other bodily rhythms.

Using information from questionnaires on the participants’ chronotypes, they also found that the centre of sleep for those working the night shift didn’t correlate with their respective chronotype, ie, their morningness or eveningness orientation. This meant they were not sleeping in synch with their internal clocks.

Importantly, even workers who had been on night shifts for many years still showed these negative effects on circadian and sleep health. The more years they had been on night work, the more severe the circadian disruption, contradicting widespread assumptions about adaptation to night work.

This helps explain why previous research has linked disrupted circadian rhythms with long-term health risks, including the development of cancer and cardiovascular diseases, as well as metabolic and infectious diseases.

Professor Bärbel Finkenstädt from the University of Warwick Department of Statistics said: “There’s still an assumption that if you do night work, you adjust at some stage. But you don’t. We saw that most workers compensate in terms of quantity of sleep, but not in terms of quality during the work time.”

Dr Julia Brettschneider of the University of Warwick Department of Statistics said: “I think there’s a misunderstanding that night-shift work is just an inconvenience, whereas it can be linked to serious health risks. We can’t avoid shift work for many professions, like healthcare workers, so we should be thinking about what can be done in terms of real-world adjustments to improve working conditions and schedules of shift workers. A better understanding of the biological mechanisms helps to find answers to this question.

“Together with our PhD student Yiyuan Zhang, we have developed a statistical analysis framework that enables the discovery of patterns and predictive factors in the complex datasets created by wearable tech.”

Professor Francis Lévi from Université Paris-Saclay further added: “Nearly 20% of the night workers could not even adjust their circadian rhythms during their free time, with the severity of impairment tending to increase with the number of years of night work. The telemonitoring technology and analysis methods we have set up make it now possible to objectively evaluate circadian and sleep health in night workers in near real time, and design prevention measures for individual workers whenever necessary.”

In addition, the team has the potential in future research to look at more long-term outcomes, such as particular diseases such as cancer that have been linked to disruption of the circadian clock.

Nurses to convene on Darwin for national conference

Approximately 700 nurses from across Australia will come together in the Northern Territory for...

After a temporary move online in 2020 due to COVID-related restrictions, Wounds Australia's...