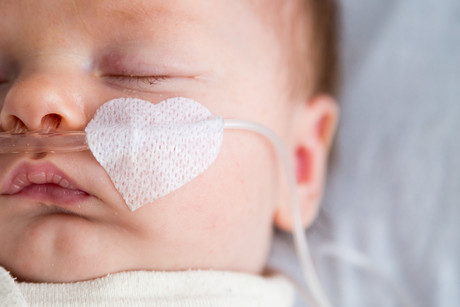 An Australian-led research project has found that low blood oxygen increases sick children’s risk of death by up to eight-fold. Low blood oxygen is common in pneumonia cases and newborn infants, particularly those born prematurely or after a very difficult birth.

Dr Graham said he hoped the findings would encourage policy-makers and healthcare workers in other low- and middle-income countries, especially Africa, to increase the use of oxygen measuring tools and oxygen therapy.

“Your blood oxygen level is the amount of oxygen carried by red blood cells from the lungs to [the] rest of the body — low blood oxygen damages cells and can lead to death,” Dr Graham said.

“Our study found that one in four newborns and one in 10 children in hospital had low blood oxygen, and these children were eight times more likely to die than those with normal blood oxygen.”

Dr Graham said pulse oximeters, which accurately measure blood oxygen levels, are widely used in Australia. But hospitals in low- and middle-income countries are not often equipped with good-quality devices, which cost about US$250.

“Our modellings suggest that better use of oxygen monitoring and therapy in the 12 highest mortality countries in the world could prevent up to 148,000 child pneumonia deaths annually,” he said.

“Our study also suggests there are thousands more children and neonates with illnesses besides pneumonia that could also benefit.”

University of Melbourne’s Centre for International Child Health is leading the implementation of solar-powered oxygen delivery systems in district hospitals in Papua New Guinea and Nigeria.

Dr Graham said that training nurses to measure and supply oxygen were simple technologies that could save hundreds of thousands of children’s lives.

“In sub-Sahara Nigeria, one in 10 children dies before their fifth birthday and the biggest killer of Nigerian children is pneumonia. Nigerian children make up one-sixth of under-five pneumonia deaths globally. The first step to preventing these deaths is detecting low blood oxygen,” Dr Graham said.

Researchers from the University College Hospital in Nigeria, University of Melbourne, The Royal Children’s Hospital, University of Ibadan in Nigeria, Ashdown Consultants in the UK, World Health Organization in Switzerland and the Bill and Melinda Gates Foundation in the US also contributed to the findings.

Help us to help you, plead nurses and midwives

The TGA has approved a novel ciclosporin solution for the treatment of dry eye...

The 2020 APHA Awards for Excellence will be announced next month, recognising the high quality of...