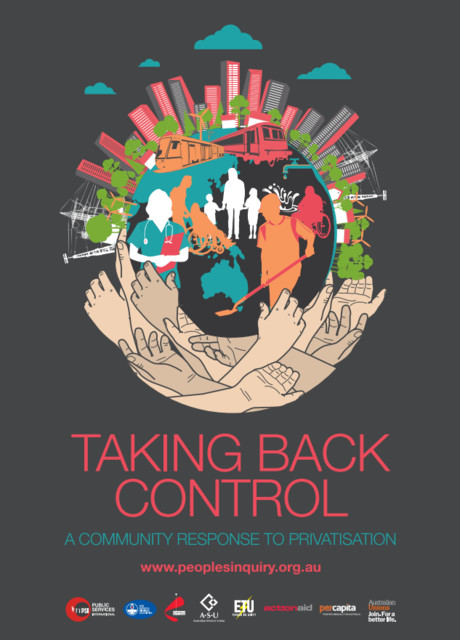 A new inquiry into privatisation in Australia has found that the widespread practice of privatising public hospitals and health services across Australia is putting nurses’ professional obligations at risk, has had a detrimental impact on the quality of the healthcare system and has blown out taxpayer-related costs.

The People’s Inquiry into Privatisation has launched its report, Taking Back Control: A Community Response to Privatisation, after visiting cities and towns in every state and territory over the past year to speak with affected community members.

The People’s Inquiry into Privatisation was initiated by Public Services International (PSI) Australia, affiliates of which are public sector unions. The aim of the inquiry was to begin a conversation about privatisation in all its forms such as outsourcing, social impact bonds, user pays, vouchers and commissioning, and to put forward a vision for the role of government in service delivery and what kind of public services the community needs.

Key issues identified as a result of health and disability privatisation outlined in the report include:

Submissions from nurses to the inquiry also raised concerns regarding risks to the nursing profession and their professional obligations, such as duty of care, if health and disability privatisations continued to occur.

Registered Nurse Robyn Brown stated to the panel: “Our public award includes staff-to-patient ratios. So, as public nurses, we enjoy a better staff capacity than a private hospital would and we have a bigger registered nurse ratio to the AIN [Assistants in Nursing] ratio than the private hospitals. We are concerned that patients are not going to be treated the same.”

The NSW Nurses and Midwives’ Association (NSWNMA), a partner of the People’s Inquiry, is well aware of the impact privatisation is having on its nursing and midwifery members.

“In a concerted effort, we’ve managed to prevent three of six hospital privatisations in NSW over the past three years, but the secrecy that’s surrounded the new public-private partnership for Northern Beaches Hospital is alarming,” NSWNMA General Secretary Brett Holmes said.

“To be now less than a year from its planned opening and staff at nearby Manly and Mona Vale Hospitals still don’t know what their conditions are, or even if they’ll have a job to go to, is outrageous policy-making on the run by the NSW Government.”

The full report makes 12 recommendations, including greater regulatory mechanisms and policy frameworks around the delivery of public services, an independent body to oversee privatised assets to ensure accountability and a moratorium on privatisation, until these conditions are put in place.

A summary version of the report may be found here.

'Caff-naps' boost alertness on the nightshift

UniSA research has found that coffee and a catnap could be the answer to staying alert on the...