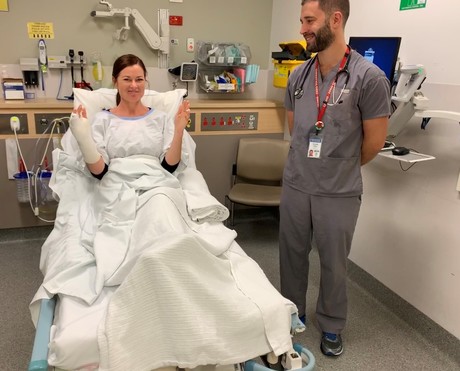 A Queensland trial into the treatment of a common hand injury, funded by the Emergency Medicine Foundation (EMF), is set to make a significant impact to fracture patient recovery times while also helping to ease emergency department demand.

The randomised, controlled trial of 126 patients who presented with a ‘boxer’s fracture’ compared the outcomes from the routine practice of plastering these injuries with a more ‘user-friendly’ approach. It is being led by Dr Richard Pellatt, a physician in the Gold Coast University Hospital Emergency Department.

“We see up to 10 patients presenting with a fifth metacarpal fracture of neck of the hand per week, many of which are working age men in their mid-20s,” Dr Pellatt said.

“Having an immobilised hand in plaster cast results in a significant amount of time off work and subsequent loss of income, and sport and social activities for these patients.

“When we buddy taped, we found the patients generally spent 30 minutes less in the ED than plaster patients and went back to work within seven days of presenting, with some resuming normal activities straight away.”

“Buddy tape patients could be followed up over the phone or with their GP, rather than attending the fracture clinic for orthopaedic specialist review,” he said.

“This in turn frees up appointments for patients with more acute orthopaedic needs and frees up some time for orthopaedic specialists and plaster technicians.”

Emergency physician Gerben Keijzers said when the study commenced three years ago it was the only Australian trial of its kind on a local population. He said a $17,000 grant from EMF was a big boost for the trial, allowing for the hire of a full-time research nurse to follow patients and statistical analysis from researchers at Griffith University.

EMF General Manager Dr Sonĵ Hall said the buddy taping research has since led to a rapid change in clinical practice which is benefiting both patients and the emergency healthcare system, reducing the ever-increasing demands on our emergency departments.