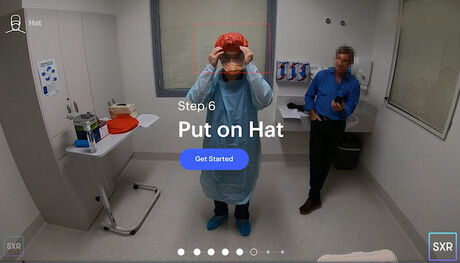 Developed by Macquarie University cardiothoracic surgeon Professor Michael Wilson and software developer Terry Carney from Futureantics, the app aims to reduce the spread of COVID-19 and other infectious diseases.

It has already been trialled at Macquarie University Hospital with nursing staff and medical students as part of a research project, with ethics approval, which will assess the effectiveness of the software in monitoring and improving compliance around PPE protocols.

The app identifies users through facial recognition, then guides them through the steps of the donning (putting on) or doffing (taking off) process, giving real-time feedback if there’s a potential breach, along with relevant advice — for example, wash your hands for 20 seconds before going any further.

“The AI-PPE system is like having a second pair of eyes watching you and making sure you don't miss anything; it’s very reassuring, particularly if you’ve done a 12-hour shift and you’re really tired,” says trainee doctor Alexandra Zacharakis, who has already done numerous hospital placements during her final year of medicine at Macquarie University.

Wilson says that there’s evidence that the biggest risk of a PPE breach to health professionals occurs when they remove (doff) contaminated PPE, a process that can involve 19 main steps.

The US Centers for Disease Control and Prevention guidelines for correctly donning and doffing PPE were developed in response to Ebola outbreaks, and outline procedures for five levels of PPE, including for trained observers. The app follows these guidelines.

“A study at John Hopkins University analysed the potential for breaches in PPE based on human error and found more than 90 potential failure factors, which gave us a really useful basis for the AI software,” Wilson explains.

The team worked with the Macquarie University Simulation Centre for six months last year to adapt the SurgicalXR training platform to support a system to guide PPE protocol compliance.

“The complex artificial intelligence behind the system immediately converts moving images from a webcam to mathematically represent someone putting a mask on their face, and then feeds the relevant information back; for example — ‘You need to put your goggles on next’,” he says.

The app has potential to be rolled out to standardise PPE protocols nationally, and to train and reskill people across all healthcare sectors, he says.

The team plans to develop future iterations of the app that can be used on a subscription basis, perhaps on mobile phones or iPads, but the current version sits on a laptop which accesses the SurgicalXR AI-enhanced platform, which is hosted on an organisation’s main computer network.

“We’ve developed this system to be a really practical, useful aid for anyone working with potentially infectious people, rather than some Big Brother-style sentry,” Wilson says.