Not your standard CEO 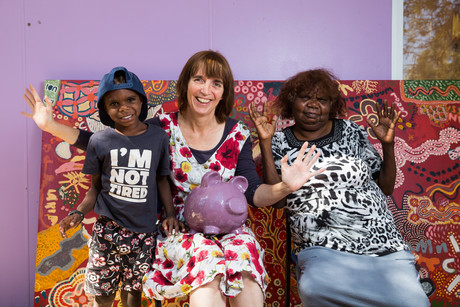 Despite years of experience, tertiary qualifications and a proven track record, Purple House CEO Sarah Brown doesn’t like describing herself as a leader. “I hate that word,” she said. She prefers to describe herself as ‘steering the Starship Purple House’, and recognises that she is not your ‘typical’ businesswoman.

“I am a woman who has never worn high heels in her life, has never worn lipstick and likes to have a joke. For me, the challenge is to puff myself up with health bureaucrats and those sorts of people,” she said.

To understand Brown’s story, it’s worth understanding the organisation she works for.

Purple House is a network of dialysis, social support services and now, aged-care services for the Aboriginal community that are dotted across Central Australia and branch into Western Australia. They are owned and run by the Western Desert Nganampa Walytja Palyantjaku Tjutaku Aboriginal Corporation.

Purple House was borne from a need to provide dialysis services on country, saving Aboriginal elders the stress and indignity of seeking end-of-life treatment for renal failure far from home and community. The idea for the service came from the Pintupi people of the Western Desert, who raised $1 million for it through the sale of their own artwork and other donated Aboriginal paintings.

“I couldn’t have imagined being in the same job for 16 years, but it’s changing all the time,” Brown said. “The challenges are different and the rewards and headaches are different, too.”

A love of nursing and country

Brown was born in England and immigrated to Australia with her family in 1974. Growing up in Maryborough, Queensland, she was a self-described “pale little Pommy kid with a broad Black Country accent that none of the other kids could understand”. Desperate to fit in, she began studying her adopted country’s history and in the process, discovered the Aboriginal story, past and present. It struck a chord with her that continued to reverberate throughout her life.

Working as a remote area nurse, often in communities where she was the only clinician, gave her a strong foundation in the health and social challenges facing Aboriginal communities, and drove home the importance of building relationships.

“There are lots of remote area nurses who run around like chooks with their heads cut off, focused on workload and how much there is to do,” Brown said. “But it’s the relationships you build with each other that last. It helped me to think outside the box, to really take the time to listen to people to find out what they wanted, and how they wanted services delivered.”

This emphasis on relationships is palpable throughout the organisation, with Brown encouraging her team to build a rapport not only with patients, the board and the community, but with the volunteers, tourists, bureaucrats and philanthropists who broadcast Purple House’s good work and contribute funding to their services.

Relationships are also the bedrock on which the organisation’s culture is built. “There’s an international shortage of dialysis nurses. We don’t pay as much as some places and we are expecting people to live in remote communities and work a 6-day roster, but we’ve got a queue of dialysis nurses waiting to work for us.

“That shows me that we’re looking after each other. It might sound twee, but if you get to build the culture of the place from the start and focus on people and the fundamentals, then good people find you.”

Building trust off the back of strong relationships is something Brown takes very seriously, especially as her role requires that she navigate two worlds. “You’ve got Aboriginal cultural priorities, and then you’ve got clinical governance — ‘White Fella’ standards. It’s incredibly complex.”

Brown works closely with Purple House’s board, which consists of 11 Indigenous directors who represent communities across the Western Desert. Most of the directors are women, and all of them are either dialysis patients or have family members impacted by renal disease. “There is trust on both sides and we’re very careful with that trust,” she said.

And while Brown acknowledges that she will never be a ‘corporate type’, she says that this doesn’t mean that Purple House can’t be agile and clever. Indeed, there are many logistical challenges that accompany running a remote location health organisation that require clever solutions — and a great deal of planning.

“What happens if you’ve got a dialysis unit with one nurse who gets crook and you’ve got six patients out there? You have to be really good at planning A to F on any one day,” Brown said.

Being clever also means knowing when to say ‘no’, to avoid stretching resources too thinly. Brown is regularly approached by communities from across the country, seeking help with setting up dialysis units. “We have to be really clever not to get buggered by our own success, stretch ourselves too far and put ourselves at risk. No-one can afford for us to get too big for our boots and fall on our faces,” she said.

Brown loves her work at Purple House so much that she finds it difficult to take annual leave. “I have an extreme fear of missing out. We have so much fun here, I can’t imagine going on holidays!” she said.

As the organisation approaches its 20th anniversary since its foundation, Brown imagines that she and the House will grow old together. But she is conscious of not overstaying her welcome, jokingly asking the team to check her ‘best before date’.

“You will tell me if I’ve expired and you want to get a new one,” she tells them laughingly. They just laugh with her and follow their unconventional CEO onto the next challenge.