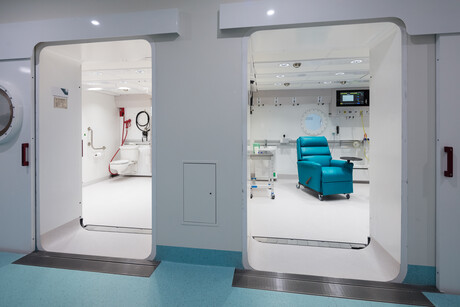 The Royal Hobart Hospital (RHH) recently opened its new Department of Diving and Hyperbaric Medicine, featuring a state-of-the-art dual-capability hyperbaric chamber. Designed by Fink Engineering and powered by a Kaeser compressed air system, the chamber is reported to be a first for the Southern Hemisphere — delivering patient treatment and a world-class research and training facility.

A medical hyperbaric chamber is used to deliver hyperbaric oxygen treatment (HBOT) — a well-known therapy for treating decompression illness; as such it is essential for commercial and recreational diving industries. HBOT is also used to treat patients with medical conditions such as diabetic ulcers, tissue injury from radiation after treatment for cancer, osteoradionecrosis and serious infections such as gangrene.

HBOT works by increasing the partial pressure of oxygen in the blood and tissues. The patient sits or lies in a hyperbaric chamber, where the pressure is increased to 2.4 atmospheres, and is given 100% oxygen to breathe via a mask or hood system. The high partial pressure of oxygen increases the diffusion distance that oxygen can penetrate into tissues. Repeated hyperoxic stimulation has proven to accelerate the healing process — on average a patient undertakes around 20 to 40 treatments over the course of four to eight consecutive weeks.

A first for the Southern Hemisphere

Queensland-based Fink Engineering designed and engineered the rectangular shape for hyperbaric chambers in 1994 and was reportedly the first company internationally to design such a chamber, which has been used effectively ever since.

The hyperbaric chamber now in operation at the RHH is fitted with a depressurisation capability to simulate altitude. There are currently only a few dual-capable chambers like it in the world. Said to be a first for the Southern Hemisphere, this can pressurise (hyperbaric) and depressurise (hypobaric), meaning that aside from treating patients with its hyperbaric capabilities, the chamber can be used for altitude research and training using its hypobaric capabilities. It will be possible for researchers, for example in the aerospace sector, to study the effects of high altitude on the body, in particular low oxygen levels and low ambient air pressure. 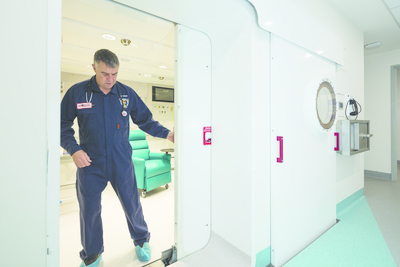 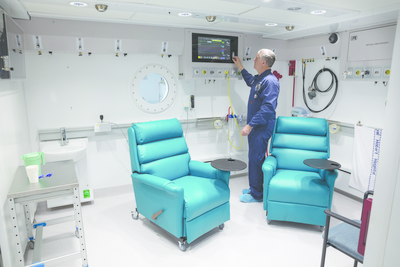 High-quality, dry and clean compressed air is essential for a medical hyperbaric chamber to operate. Once patients have been fitted with a breathing mask or hood system, the doors to the hyperbaric chamber are closed. The atmospheric pressure inside the chamber is then increased by opening values that allow high-pressure air to enter.

For many years, Fink Engineering has chosen Kaeser compressed air equipment. In the case of RHH, two CSD 125 T rotary screw compressors with integrated refrigerant dryers along with a comprehensive air treatment package were chosen.

“The hyperbaric chambers require high quality and high volumes of clean and medical breathing air that meets Australian and New Zealand standards. It is essential that the air is medical grade and clean,” Fink Engineering Project and Maintenance Supervisor George Fink explained.

“Staff inside the chamber breathe pressurised air while attending to patients. Patients receive hyperbaric oxygen treatment while breathing from a mask or a hood. They also breathe the hyperbaric chamber air when taking short breaks during treatment.

“It is essential that the compressed air system is reliable. Ultimately the last thing you would want is a compressor failure to stop the chamber functioning mid-treatment. That’s also a reason we chose to install a double redundancy system. That way there is always a backup compressor if required to supply the compressed air needed to finish a treatment,” Fink said.

A reliable and efficient solution

“In fact, many of our installations in hospitals throughout Australia operate with a Kaeser compressed air system — some for as long now as 15 years. They just keep working!”

“Fink recommended the Kaeser compressed air system due to their proven track record. We have been operational now for three months and the system is going well. Our staff are looking forward to welcoming more patients with our greater treatment capacity and opening our facility for research and teaching.”

Designing for community, connection and sense of place

When Korongee Village officially opened its doors in July this year, it marked the beginning of a...