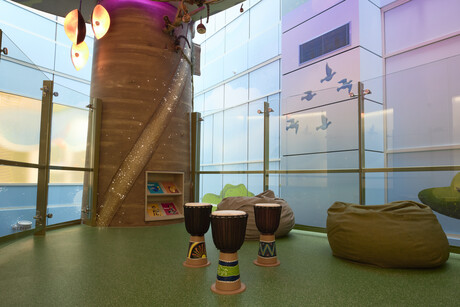 The Moose Imagination Tree, unveiled at Monash Children’s Hospital in April this year, is a magical and wondrous space designed and created to help transform the patient’s hospital experience.

Standing at over 16 metres tall, The Moose Imagination Tree spans four levels of the Monash Children’s Hospital, offering a variety of activities and spaces where visitors can explore, play or relax.

Developed in collaboration with Child Life Therapy specialists, paediatricians and caregivers, The Moose Imagination Tree is a place to aid in the healing process. Imagined by The Walt Disney Company and built by Moose Toys, the tree was created for children and adults alike — from children who have been confined to the hospital due to illness, to those visiting their sick siblings, to parents who need a sense of relief and happiness during stressful and worrying times.

The tree rises from the ground floor of Monash Children’s Hospital and climbs through to the very top of Level 5. Guests to the tree are encouraged to explore, restore and play through a variety of sensory experiences. At the centre of the tree is a magical area known as ‘The Knot’ — a special place that invites visitors to share their deepest desires, dreams and thoughts. These are carried up into the tree in a display of sound and stardust. Each evening at the close of visiting hours, all of the children’s intentions converge within the tree, lighting it up. They travel up through the levels of the tree to the brightest star, high above the tallest branches. This is the Kiss Goodnight — a Disney tradition that creates memorable moments to leave you with happy memories at the end of the day. 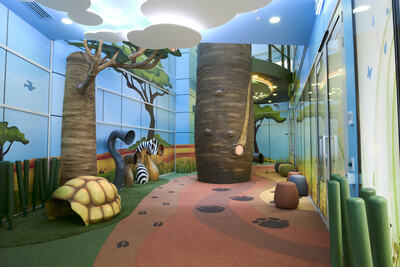 Design themes focus on the African savannah, taking inspiration from classic Disney film The Lion King. Projected lights, touch-sensitive and motion-capture elements, and audio cues are featured, including original music and soundscapes commissioned and created in South Africa. The tree features audio-visual elements designed to delight children so that, even for a moment, they can forget the hospital tests and routines and treatments. The tree will help to transport children to an African savannah, so they can imagine themselves chasing a playful monkey, splashing in a rock pool or simply lounging under a towering vine-laden tree. 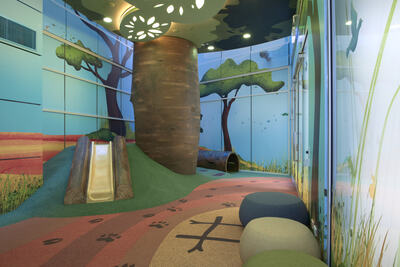 At the base of the tree on Level 2, guests can partake in activities such as climbing grassy hills, following animal tracks in the mud, lounging around the watering hole, playing floor games and listening to the sounds of the wild. 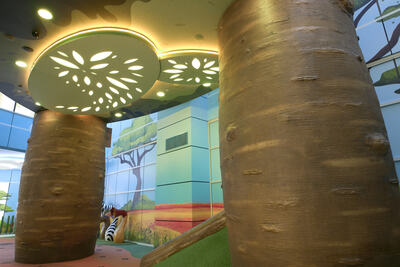 Level 3 is an inviting space filled with a collection of hanging artefacts. Here, guests can bang away on drums or dig through an African basket filled with smaller instruments to create lively beats and harmonious melodies.

As guests travel upward through The Moose Imagination Tree, they find themselves leaving behind the wild activity of the grasslands and lower canopy, and moving toward more peaceful spaces that promote quieter, deeper connections.

On Level 4, there is a relaxing space for friends to congregate, connect and unwind, leaving behind the world they are in, even just for a few moments. On the very top level, guests can lie back on large beanbags that blend in with the surrounding canopy to read favourite books or watch the sky change from day to night. 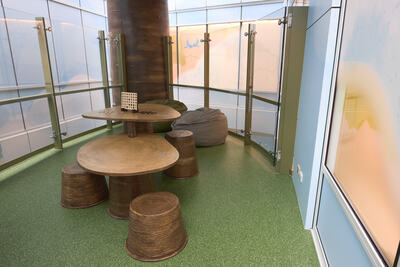 For children with mobility issues or who may not be well enough to visit The Moose Imagination Tree, a digital experience is under development to allow many of the features, including the Kiss Goodnight, to be experienced at the bedside.

The tree is accessible from each level of the hospital, with an open and spacious play environment on the ground level. Each level is tailored to the needs of nearby wards and treatment areas. For example, Level 5 houses the Neonatal Intensive Care Unit and Special Care Nursery, so Level 5 of tree is designed more as a quiet respite for parents and siblings, since babies on this level are usually unable to leave their clinical unit. Level 5 will also be a quieter area for children who may have a need for low-sensory play, such as children with autism spectrum disorder.

Other areas are more dynamic and include a sound-and-light show, play structures, motion-capture elements and musical instruments. Multiple elements of tree are designed specifically for children with mobility issues or a disability.

“Monash Children’s Hospital cares for over 100,000 children every year,” Monash Health Chief Executive Andrew Stripp said. “Children might be with us for an hour and then go home, but others are with us for many months at a time due to chronic illness. The Moose Imagination Tree is remarkable because it caters to all of those patients and their families.

“We’re incredibly grateful for the support, vision and creative strength of Moose Toys and The Walt Disney Company who have brought The Moose Imagination Tree to life.”

The Moose Imagination Tree has been funded by generous philanthropic support. During construction of the Monash Children’s Hospital, funded by the Victorian Government, an area had been set aside in the hospital to allow natural light into the building and some open space for visitors to relax. However, Monash Health wanted to deliver a space that would exceed the expectations of parents, children and visitors; a healing space that would captivate and delight children, allowing them to be children and not simply patients. 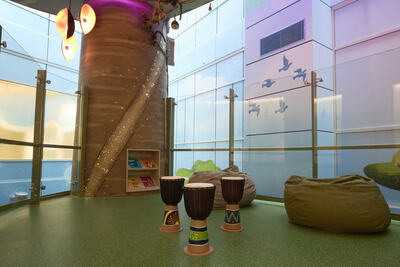 Monash Children’s Hospital’s Child Life Therapy team have been crucial in The Moose Imagination Tree’s development, and have ensured it remains a non-clinical space for calm, quiet and healing.

With the seed of an idea, in 2015 Monash Health approached The Walt Disney Company, Australia and New Zealand, and the brilliant creative minds at Disney volunteered to work on detailed concepts.

Disney’s Imagineers in Australia and the US developed the concept of a multi-storey tree, aligning with animal themes already planned for the hospital, with special attention paid to the needs of patients and their families.

With an incredible design inspired by Disney, the seed had been planted. Moose Toys, a longtime supporter of Monash Children’s Hospital who had been involved in some of the other play space projects around the hospital, loved the idea.

Imagined, created and nurtured by the Imagineers of The Walt Disney Company and built together with Moose, the tree stems from this ongoing partnership and the collective commitment to improving the hospital experience for children.

Kylie Watson-Wheeler, SVP and Managing Director The Walt Disney Company ANZ, said, “Disney is famous for storytelling; it’s at the heart of everything we do, allowing us to transport generations to a magical place where the everyday no longer exists, anything is possible and for a brief moment you’ve become a part of something bigger.

“The Moose Imagination Tree was imagined by The Walt Disney Company and created by our Disney Imagineers over the last seven years. A truly global effort across our company bringing together a team that consisted of animators, musicians, talent artists, projection experts, creative directors, graphic designers and our best storytellers,” Watson-Wheeler explained.

“Disney worked alongside local Monash Health practitioners including play therapists and paediatricians, allowing the creation and foundation of the tree to be grounded in research and best practice. We have a goal to deliver comfort and inspiration to families facing serious illness by reimagining the patient journey in children’s hospitals. We couldn’t be more excited about this wonderful project!”

Paul Solomon, co-owner of Moose Toys, said, “At Moose Toys, we are deeply entwined with the Monash Children’s Hospital. With over a decade of partnering together, they have become part of the Moose family.

“We are incredibly excited to help bring to life The Moose Imagination Tree, a structure that will help cement Monash Children’s Hospital as a world-class paediatric hospital,” Solomon said.

“The Moose Imagination Tree is the physical embodiment of everything our foundation stands for. Allowing kids to be kids no matter what their circumstances, to have access to the pure power of play and to use their imaginations. Helping them forget they are in hospital makes it so meaningful. We exist to make children happy and we believe this spectacular structure will most definitely do this.”

Neo-Bionica, a joint venture between The Bionics Institute and The University of Melbourne, is an...

The mental health unit will treat a range of disorders, with specialised support for depression...

Hames Sharley was commissioned as the architect for a major refurbishment at the campus.

E-signature rollout... what could go wrong?