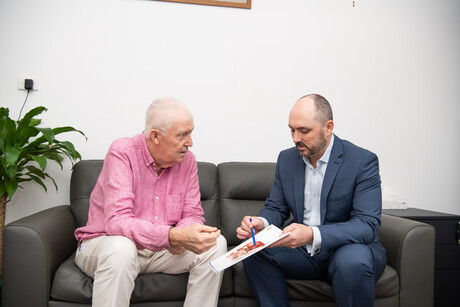 Historically, esophagectomy surgery is an invasive procedure performed with large incisions made in the patient’s abdomen and chest. By contrast, the Ivor Lewis procedure involves keyhole surgery with small incisions and is only available in a handful of hospitals across Australia.

“Recovering from incisions can take many months. With a minimally invasive approach we can get most patients home in about one week with significantly less pain medication and a lower infection rate,” Dr Whiting said.

Mater Private Hospital Townsville Executive Officer Libbie Linley said hundreds of North Queenslanders will benefit from the extensive training Dr Whiting undertook at the Norfolk and Norwich University Hospital in the United Kingdom to become accomplished in the procedure.

“To perform these procedures, surgeons are required to develop their skills, which are only found in specialist centres,” she said.

“This is a great outcome for patients who no longer have to travel out of North Queensland for the procedure, and they can feel confident receiving the highest possible standard of care in Townsville without having to be far away from their support network.”

The two-stage procedure involved removing the lower esophagus and top of the stomach, including draining lymph nodes.

The patient was former Cairns mayor Kevin Byrne, 73, who was found to have a 4 cm tumour at the junction between his esophagus and stomach during a gastroscopy in October last year. A tube was made with part of the stomach that was later rejoined to the esophagus.

Patients requiring this kind of surgery often present with tumours that cause symptoms such as difficulty swallowing, weight loss, pain, reflux (heartburn) and anaemia from bleeding.

“Being able to travel from Cairns to Townsville to have this done is amazing. Otherwise, I would have had to travel to Brisbane and spend a lot more time recovering in hospital,” Byrne said.

“My quality of life has been improved and my prognosis is a lot better now that I’ve had this surgery.”