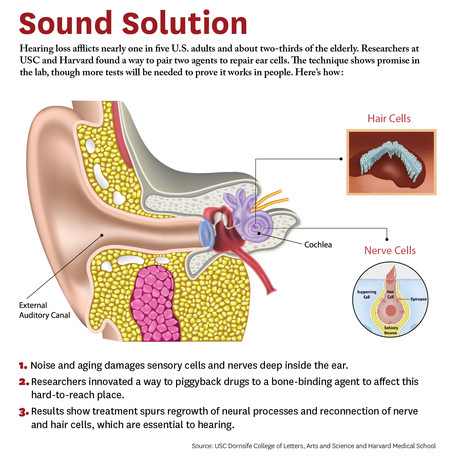 Scientists have found a way to repair damaged nerves and cells inside the ear, using a technique that could soon restore hearing to millions of elderly people and others suffering hearing loss.

The lab study, conducted by scientists at USC and Harvard University, is a potential remedy for a problem that afflicts two-thirds of people over 70 years and 17% of all adults in the United States.

“We figured out how to deliver a drug into the inner ear so it actually stays put and does what it’s supposed to do, and that’s novel,” said Charles McKenna, a corresponding author for the study and chemistry professor at the USC Dornsife College of Letters, Arts and Sciences. “Inside this part of the ear, there’s fluid constantly flowing that would sweep dissolved drugs away, but our new approach addresses that problem. This is a first for hearing loss and the ear. It’s also important because it may be adaptable for other drugs that need to be applied within the inner ear.”

However, there are caveats. The research has not yet been tested in living animals or humans, yet the researchers are hopeful given the similarities of cells and mechanisms involved. McKenna says since the technique works in the laboratory, the findings provide “strong preliminary evidence” it could work in living creatures. They are already planning the next phase, involving animals and hearing loss.

The study breaks new ground because researchers developed a novel drug delivery method. Specifically, it targets the cochlea, a snail-like structure in the inner ear where sensitive cells convey sound to the brain. Hearing loss occurs due to ageing, working with noisy machines and too many loud concerts. Over time, hair-like sensory cells and bundles of neurons that transmit their vibrations break down, as do ribbon-like synapses, which connect the cells.

The researchers designed a molecule combining 7,8-dihydroxyflavone, which mimics a protein critical for development and function of the nervous system, and bisphosphonate, a type of drug that sticks to bones. The pairing of the two delivered the breakthrough solution, the researchers said, as neurons responded to the molecule, regenerating synapses in mouse ear tissue that led to repair of the hair cells and neurons, which are essential to hearing.

“We’re not saying it’s a cure for hearing loss,” McKenna said. “It’s a proof of principle for a new approach that’s extremely promising. It’s an important step that offers a lot of hope.”

The study was recently published in the journal Bioconjugate Chemistry.