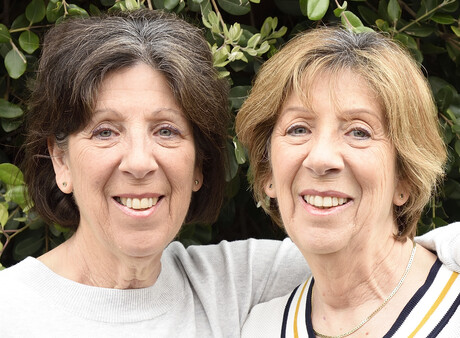 In 2013, Judy Kohn was diagnosed with breast cancer at the age of 59. Six years later, her identical twin Raie Moss received the same news.

The Melbourne-based pair has joined a major new study run by Twins Research Australia (TRA) — based at the University of Melbourne — which seeks to explain why only one twin in a pair develops breast cancer, or if both twins are diagnosed, why one twin does so earlier.

Judy and Raie are sharing their stories to encourage other twins to join the study.

“We’ve been able to support each other through some very dark times,” Raie said. “When we found out we could help others like we helped each other, we jumped at the chance.”

By understanding the differences between twins with breast cancer, researchers are hoping to find new insights into how lifestyle factors could protect against breast cancer.

“Through studying twin pairs, we’ve identified the first gene that influences both mammographic density and risk of breast cancer, called LSP1; found that a new epigenetic risk factor for breast cancer is determined in the uterus; and discovered a new technique to interpret mammograms that identifies women at greater risk of developing breast cancer.”

Professor Hopper said the new study aims to identify the factors in early life — especially around the time of puberty — that predicted risk of breast cancer.

“The study makes use of twins’ unique insights into one another, especially when they were younger and living together,” he said.

The Australian study is part of an international collaboration, co-led by researchers at the University of Southern California, funded by the National Institutes of Health (USA). It is hoped the research findings will contribute to improved preventative strategies for breast cancer worldwide.

Identical and fraternal female twin pairs aged 18 years and above — in which one or both twins have had a diagnosis of breast cancer — are invited to participate. The study will involve an initial online survey and possibly the later collection of digital mammograms and blood or saliva samples.

Eligible twins can learn more and register to participate at twins.org.au/research/current-studies.