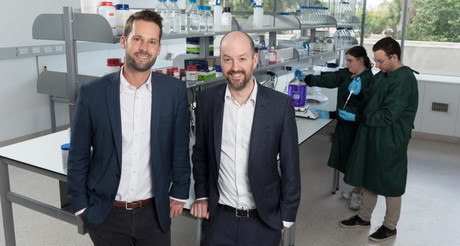 BiomeBank co-founders Dr Sam Costello and Dr Rob Bryant said FMT was proving to be a lifesaving procedure for patients with debilitating Clostridioides difficile (C.diff) infection and had shown promising results in other bowel conditions.

But patients outside of South Australia cannot access the vital stool bank until the new lab meets strict rules for transporting samples out of the state.

“We have been facilitating FMT for patients with C.diff since 2013, with a cure rate of about 90%,” Dr Costello said.

“However, access to this therapy has been limited to South Australia due to restrictions on transporting the faecal product across state borders.

“With the new laboratory, we aim to gain the crucial accreditation needed from the Therapeutic Goods Administration (TGA) to enable safe and reliable stool distribution interstate and also internationally.”

The new laboratory opened in the inner-Adelaide suburb of Thebarton and is central to the process where stool from a healthy person (who has undergone stringent screening) is processed and then transplanted into the bowel of a patient with disease.

Doctors use the transplant to help replenish the good bacteria within the patient’s gut, effectively curing them of the disease.

With BiomeBank’s quality-controlled screening, storage, processing and transport practices, Dr Costello estimates more than 500 Australians a year could be cured of C.diff.

People with C.diff often get the infection after taking antibiotics as they have a reduced diversity of bacteria in their gut. Some patients may experience diarrhoea, blood in their stool and dehydration, while others can develop severe bowel inflammation that can result in death or toxic shock.

“In addition to treating patients with C.diff, trials have shown promising results in inducing remission of ulcerative colitis — an inflammatory bowel disease with symptoms such as diarrhoea, abdominal pain and bleeding. We are currently conducting a trial to determine if we can maintain remission of this disease,” Dr Costello said.

“We are also collaborating on a trial for autologous (self) FMT for patients undergoing chemotherapy, where patients save their own stool prior to chemo for re-administration into the bowel after their treatment, to reduce the risk of complications associated with depleted gut microbiota after chemotherapy.”

BiomeBank was established in 2013 and is the first public stool bank in Australia to treat chronic bowel disorders.

It is a partner of The Hospital Research Foundation Group, which works to find cures for debilitating gut conditions affecting the community.

BiomeBank’s mission is to provide improved access to safe and effective faecal microbiota transplantation (FMT) to patients across Australia and internationally, while continuing to develop microbial based therapies to treat and prevent disease.

This work is licensed under a Creative Commons Attribution 4.0 International licence.