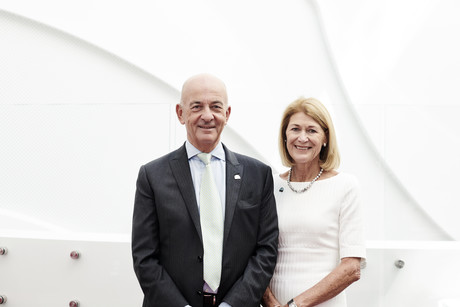 Advancements in lymphoma genomics will eventually eliminate the need for chemotherapy in treating cancer.

Thanks to a new lymphoma research centre at the Peter MacCallum Cancer Centre in Victoria, Australian lymphoma patients are now one step closer to this target.

The Christine and Bruce Wilson Centre for Lymphoma Genomics was made possible with a very personal pledge of $5.5 million, facilitating advanced genomic testing of tumours at Peter Mac, which will lead to more accurate diagnosis and better treatment choices, and represents Australia’s global leadership in the emerging field of ‘personalised medicine’.

Up until now, a very small percentage of lymphoma patients have been able to access genomics testing, which has meant many Australians affected by hard-to-treat cancers have not had access to personalised medicine that matches a treatment to the specific condition for that patient.

The new centre is set to change that, and has been made possible by the generosity of Christine Wilson and her family. Through the Snowdome Foundation, the Wilson family has pledged $5.5 million over four years towards the program of research.

“We were struck by how genetics testing can save lives, or improve quality of life, for a group of patients who are in dire need of other treatment options,” Mrs Wilson said. “As a patient living with lymphoma for 25 years, I have been fortunate enough to experience the benefits of this cutting-edge technology. My family hopes that our support will make the centre’s groundbreaking work accessible to all Australians affected.”

Blood cancers are the third leading cause of death from cancer.1 It is estimated that in 2014, 12,165 Australians were diagnosed with blood cancers (lymphoma, leukaemia, myeloma, myelodysplastic syndromes) and 4610 Australians will die from blood cancers. Most people who develop a blood cancer will be over the age of 60, and this is particularly true for the most common cancers: myeloma, chronic lymphocytic leukaemia, non-Hodgkin lymphoma and myeloid leukaemia.

Genomics involves testing the patient’s blood to look for critical gene mutations known to play a role in cancer. If found, the patient can be diverted to a new treatment — or enrolled in a clinical trial — to access drugs known to work against cancers involving these specific mutations. In order to provide this useful information, multiple genes (sometimes as many as 50–100) need to be tested simultaneously using a technique known as ‘Next Generation Sequencing’.

This new approach requires cutting-edge and highly specialised laboratory processes, instrumentation and computing power, and is performed by haematologist Dr Piers Blombery and his team of scientists, technicians and bioinformaticians in the Molecular Haematology Laboratory in the Pathology Department at Peter MacCallum Cancer Centre.

Both Peter MacCallum Cancer Centre and The University of Melbourne will commit additional resources to support broadening the scope of the Christine and Bruce Wilson Centre of Lymphoma Genomics to extend the concepts of complex genetic analysis to myeloid malignancies such as acute myeloid leukaemia. Snowdome Foundation’s ultimate goal is to raise $10 million for genomics research.