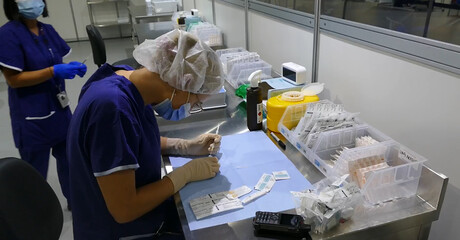 With the arrival of 1 June 2021, Australia faces a second winter in the cold shadow of the COVID-19 pandemic. There are many reasons to feel more optimistic about the cooler months ahead, even as newly alphabetised variants play havoc with tried and true 2020 approaches to containment.

Following the federal government’s strategic shift in May, Australia’s COVID-19 vaccine rollout is growing dramatically in scale and, as they have been since Phase 1a, hospital pharmacists and technicians find themselves at the very centre of the largest public health initiative in Australia’s history.

This is not a figurative notion: under the broad expanses of civic spaces normally used for exhibitions and indoor sports, hospital pharmacy often leads the set-up and operation of state-run mass vaccination clinics.

The state and territory clinics are using vaccines by both Pfizer and AstraZeneca, requiring immense logistical skill as well as unparalleled, specialised medication management know-how.

In many cases, hospital pharmacists are taking charge of preparing vaccines rather than leaving it to immunisers at the point of administration, thus maximising the immuniser workforce and helping to ensure vaccination demand is met.

Winter sees a further shot in the arm as the second dose campaign of the AstraZeneca vaccine begins, which will result in a steep increase in the percentage of Australians who are fully vaccinated.

Of course, there is a long way to go.

The COVID-19 vaccine rollout is incredibly complex in scale and scope and it is critical that government and health professionals continue to make strategic changes in response to new safety data.

The revised national approach from April — in which the AstraZeneca vaccine is offered to Australians aged 50 and over at state‑run clinics and respiratory clinics, while Pfizer vaccines remain prioritised for Australians under 50 years of age in Phase 1a and 1b until supplies increase in the second half of the year — means the full, complementary strengths of Australia’s acute and primary healthcare sectors won’t be utilised symbiotically for a few months to come.

Phase 2a commenced in May, which saw all Australians over 50 years of age eligible for a vaccine, and by early June, the second-dose campaign for AstraZeneca’s vaccine had begun, driving a significant uptick in rates of fully vaccinated Australians in following weeks.

At the same time, several jurisdictions including New South Wales, Victoria, Queensland and the Australian Capital Territory have moved ahead of the national rollout plan and allowed Australians aged 40–49 years to be eligible — for now, this cohort will be vaccinated exclusively in state and territory clinics, as the only setting providing the Pfizer vaccine. South Australians aged 16–49 years and residing in non-metropolitan areas are also able to receive the Pfizer vaccine from state-run clinics.

With the rollout in community pharmacies delayed until September 2021, hospital pharmacists are currently flying the flag for the profession in this momentous program. The Society of Hospital Pharmacists of Australia (SHPA) continues to support our members as they work with their hospital colleagues expanding state government vaccine hubs in strategic and high-impact locations.

When winter gives way to spring, the recalibrated strategy will truly harness the responsiveness of all pharmacists to the needs of the populations they serve, wherever they may live.

It is too early to forecast next summer, but we can take solace in the fact we have science — and momentum — on our side.

From delivering over 500K vaccinations to disability and aged-care residents to achieving over...