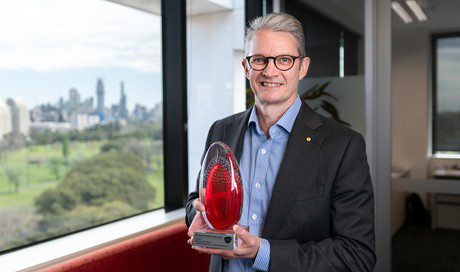 Malaria is one of the most important health problems humans have ever faced. Malaria was responsible for over 430,000 deaths in 20171 and 1200 children die of the disease every day.2

To combat this devastating disease — which is one of the leading causes of death and disease burden globally — advancing and supporting leading research at all levels is critical.

Professor Brendan Crabb AC, Director and CEO of Burnet Institute, has received the 2019 GSK Award for Research Excellence for his research focused on finding the next generation of treatments and vaccines for this devastating disease. His work has transformed how scientists explore malaria prevention and treatments globally.

Professor Crabb was involved in the technical breakthrough of DNA ‘transfection’ of the malaria parasite. Transfection is a powerful tool that enables scientists to manipulate the genome of the malaria parasite. By tweaking the parasite’s DNA, Professor Crabb and his team are working to discover which mutations are responsible for drug resistance and what parts can be targeted by new medicines and vaccines.

“There is probably no more impactful contribution to human development than ridding the world of malaria,” Professor Crabb said.

“The scale is unimaginable with around 3.2 billion people at risk of the disease.3

“While malaria most significantly impacts the world’s poorest countries near the equator, this has a flow-on effect for Australia. Countries like Papua New Guinea and Indonesia are our neighbours, trading partners and popular travel destinations. We need to work collaboratively to help these countries deal with the burden of malaria. It will improve their health and drive greater security and prosperity for all,” he said.

Professor Crabb said that winning the GSK Award for Research Excellence highlights the power of local collaboration and brings greater awareness to the importance of combating malaria.

“Everything I’ve achieved has been done as part of a team. This award also recognises the efforts of my colleagues, teams, industry and patients. I am honoured to have received this award — especially as it draws attention to the fact that many of our human brothers and sisters still suffer enormously from malaria,” Professor Crabb said.

“The work of Professor Crabb is testament to the impact home-grown research and innovation can have on a global scale. We are honoured to recognise research enabling further discoveries and better outcomes for people suffering from global health inequities,” Dr Weekes said.

The GSK Award for Research Excellence is one of the most prestigious awards available to the Australian medical research community. It has been awarded since 1980 to recognise outstanding achievements in medical research with potential importance to human health.

Among the previous recipients of the GSK Award for Research Excellence are some of Australia’s most noted scientific researchers, including Professor Tony Basten (1980), Professor Nicos Nicola (1993) and Professor Kathryn North (2011). The 2018 GSK Award for Research Excellence was awarded to Professors Georgina Long and Richard Scolyer from the Melanoma Institute of Australia for research that has tripled the life expectancy for some patients with advanced melanoma and transformed how the cancer is diagnosed and managed.