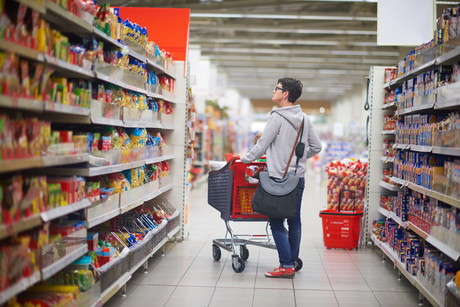 Australia’s packaged foods are less healthy than those of the UK and USA, but are among the healthiest globally, an international analysis has found.

But the high levels of sugar, saturated fat, salt and kilojoules in many favourite products on supermarket shelves were potentially making us sick, with a possible “tsunami of dietary ill health” coming our way, the researchers said.

The George Institute for Global Health analysed more than 400,000 food and drink products from 12 countries and territories around the world.

The results were published in Obesity Reviews.

The countries were ranked using Australia’s Health Star Rating system, which measures the levels of the nutrients such as energy, salt, sugar and saturated fat, as well as protein, calcium and fibre, and assigns a star rating from ½ (least healthy) to 5 (the most healthy).

The study found that the UK had the highest average Health Star Rating of 2.83, followed by the US at 2.82 and Australia at 2.81.

Lead author Dr Elizabeth Dunford said the results were concerning because packaged foods and drinks were driving a double burden of diet-related diseases in many low- and middle-income countries.

“Globally we’re all eating more and more processed foods and that’s a concern because our supermarkets shelves are full of products that are high in bad fats, sugar and salt and are potentially making us sick,” she said.

“Our results show that some countries are doing a much better job than others.

“Unfortunately, it’s the poorer nations that are least able to address the adverse health consequences that have the unhealthiest foods.”

“Billions of people are now exposed to very unhealthy foods on a daily basis,” he said.

“The obesity crisis is just the first ripple of a tsunami of dietary ill health that is coming for us.

“We have to find a way that the food industry can profit from selling rational quantities of quality food, rather than deluging us with unhealthy junk. There are few greater priorities for human health.”

The report noted that many of the world’s major food and drink manufacturers had signed up to the International Food and Beverage Alliance and made pledges to reduce levels of salt, sugar and harmful fat.

The report findings could provide an impetus for companies to improve the healthiness of their product ranges, the researchers said.

University of South Australia researchers are looking for a new biomarker for osteoarthritis, a...

Pringles can set for eco makeover

Biomarkers used to detect traumatic brain injury on the spot

Peripheral nervous system may play a role in autism

Polyethylene: new catalyst breaks it down to boost value