Isolated, confused and depressed: the pandemic's toll on people with dementia and their carers 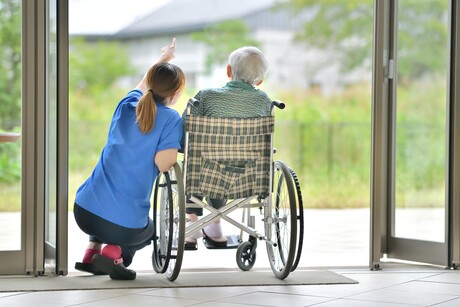 The COVID pandemic has had a huge impact on people living with dementia and their family carers around the world. Our study found people with dementia experienced worse symptoms after the pandemic began.

Carers reported their loved ones were more disoriented, restless and withdrawn. They also reported poorer mental health themselves as a result of the pandemic.

Dementia is an umbrella term that describes a range of progressive neurological disorders, such as Alzheimer’s disease and frontotemporal dementia.

The number of people living with dementia has more than doubled in the past 20 years worldwide. Dementia currently affects approximately 480,000 Australians, and one in ten people over the age of 65.

Nearly 1.6 million people in Australia care for someone living with dementia.

Given the progressive, neurodegenerative nature of dementia, deterioration of symptoms generally occurs gradually over time. However, we found an accelerated decline of symptoms over a short period of time (within a few months) during the pandemic, which may not be attributable to the typical course of dementia.

Why is the pandemic particularly challenging?

People with dementia can have difficulties understanding why public health measures are important. They may not understand why they can no longer hug or kiss their loved ones, or see them in person.

Symptoms of dementia such as perseverative behaviour (which might manifest as inflexibility to changes in routines) and disinhibition (which might involve approaching or touching strangers) can make it harder to follow public health guidance for social distancing, washing hands and wearing masks.

Mask wearing can also be uncomfortable and impact the person’s ability to recognise and communicate with other people.

Lockdowns and bans on visitors in aged care facilities have led to increased social isolation.

Loss of access to health, respite and community services have removed essential sources of support for both people with dementia and their family carers.

From April to November 2020, we conducted an online survey of 287 carers of people with dementia, from clinics in Australia, Spain, Germany and the Netherlands.

We asked carers about the impact of the pandemic on the person they were caring for, as well as their own mental health, social support and knowledge about the COVID pandemic.

We found 39% of people with dementia had worse depression since the COVID pandemic.

More than one-third of people with dementia had worse apathy (loss of motivation) and anxiety. They also had worse delusions, that is, unshakeable beliefs about things that are not true. For example becoming increasingly paranoid or suspicious of unfamiliar surroundings, such as people wearing personal protective equipment (PPE), and changes to their daily routines, such as not being able to see their families.

More than one-quarter had worse irritability and agitation compared to before the pandemic.

People with dementia who weren’t living with their carer (for example, those in aged care facilities) had a higher risk of worse outcomes. These symptoms may be exacerbated by the reduction in meaningful contact with their loved ones, and disconnection from their usual social activities and routines.

More than half of carers reported they had worsened mental health since the pandemic began and 63% had a reduced social network.

Carers said they had difficulty managing day to day, due to the social isolation and the relentlessness of the condition.

Female carers reported worse mental health than male carers. While female carers are generally more likely to report greater stress, throughout the pandemic, women have also had to take on more household and family responsibilities and may be increasingly time-poor.

For those caring for someone living in an aged care home, not being able to visit their loved ones was distressing and added to their stress.

Interestingly, carers in Spain were less likely to report worsened mental health than carers in Australia and Germany. Intergenerational living and greater familial support networks for those living at home may have helped lessen the impact on carers’ mental health.

Compassionate care is vital during the pandemic, and helps to maintain cognitive and physical stimulation, and meaningful social connections.

To help support carers and people with dementia during the pandemic, we have developed a free, evidence-based toolkit, with tips on communicating health messages, managing symptoms and staying connected.

Understanding the lived experience is key to inform policy and health settings to balance risk and quality of life. Our findings suggest COVID restrictions, particularly on visits to aged care facilities, may lead to an accelerated decline for people with dementia, and poorer mental health outcomes for carers.

Encouragingly, national cabinet has endorsed a more “nuanced” approach to managing COVID-19 in aged care, rather than locking down entire facilities.

Going forward, we need to find other ways to protect people from virus transmission while also considering the psychological impact of isolation.