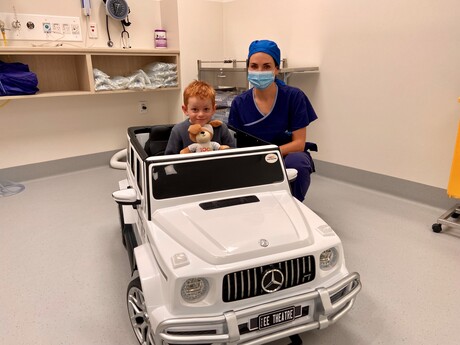 Young patients can often develop pre-surgical anxiety due to being in an unfamiliar environment, surrounded by strangers wearing face masks, shields and surgical gowns. Pre-operative anxiety has also been shown to increase post-operative confusion.

The idea of taking children to theatre in the 4WD at Epworth Eastern was the brainchild of operating theatre Clinical Nursing Specialist Alex Allen. As part of her ongoing professional development, Allen looked at a study carried out overseas aimed at reducing anxiousness in children ahead of surgery.

“The study looked at three groups of children: one group walked into the theatre, children in the second group were sedated before going into theatre and the third group of children were driven into theatre in a remote-controlled car,” Allen said.

Theatre staff have been trained to safely drive the remote-control car, delivering the patient to theatre.

“Prior to having our car, we used to notice that as soon as children came around the corner into the theatre environment they would hold on tight to mum or dad while being faced with such an unfamiliar environment, many masked strangers and lots of equipment.

“Now we notice that the children are excitedly coming around the corner searching for the car and then once in the car they are even given the choice to play their favourite song. It gives them a sense of control and serves as a great distraction for them.

“Our patients have been so excited to ride in the car. One patient was still talking about it as he went off to sleep in theatre.”

Five-year-old Aston Cook was the first patient to be driven into theatre in the new 4WD.

“Everyone involved rallies around to mitigate the stress of the unfamiliar environment with games, chatting and music, but it is always a challenge. Our first patient, Aston, couldn’t get into theatre fast enough and jumped up on to the operating table grinning from ear to ear. It even settled mum down — a win all around,” White said.

Epworth Eastern Executive General Manager Kerry May said it’s a big help to calm the smallest of patients. “We do ear, nose and throat procedures and minor plastic surgery on children at Epworth Eastern,” May said.

“Anything we can do to help reduce their anxiety makes it easier on them and their parents and helps in their recovery.”