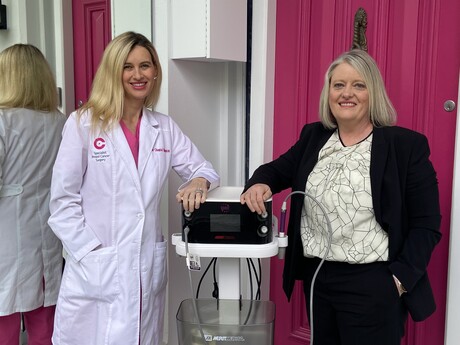 Melbourne woman Jodie Talone is said to be the first patient in Australia to have a tumour removed with the assistance of the SCOUT radar technology.

Traditionally, a radiologist inserts a wire into the tumour on the morning of breast cancer surgery. Once in theatre, the surgeon uses the wire to locate and remove the tumour.

“Jodie’s cancer was just underneath the muscle, underneath the collar bone, so when you insert the locating wire, as soon as you lift the area to remove the tumour, the wire falls out and you lose your place,” Dr Thornton said.

Instead, a rice grain-sized reflector was inserted into the tumour two days before surgery, reducing the stress on Jodie on the day of the operation.

A radar probe was then used in theatre to guide Dr Thornton to within one millimetre of the cancer, allowing the tumour and the probe to be safely removed.

The ability to precisely locate tumours increases the probability of complete cancer removal and reduces the amount of healthy tissue that is removed.

Dr Thornton said in Jodie’s case, the radar technology made it much safer. “It was a very tricky area, close to the axillary vein which goes to the neck and supplies blood to the arm. It’s also close to a lot of nerves for the arm, so being extremely accurate in locating the tumour is vital.”

“Without the SCOUT probe, it is like trying to find a needle in a haystack as the cancerous lymph node was only 4 mm wide. There’s no point taking a patient into theatre if you can’t safely locate the cancer.”

Without the use of the radar technology, this type of surgery poses a greater risk.

It’s the second time Talone has had breast cancer. Blood tests and MRI scans didn’t show any sign of the cancer, which was picked up as a small speck on an ultrasound taken of her biopsy.

With the assistance of the SCOUT radar, surgery removed the entire tumour. Jodie has had radiotherapy and is now undergoing chemotherapy.

The SCOUT system was funded by donors to the Epworth Medical Foundation, a not-for-profit private hospital group.