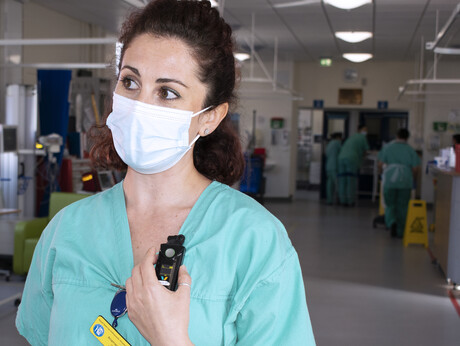 In December 2018, the UK’s Royal National Orthopaedic Hospital (RNOH) NHS Trust opened its new, state-of-the-art Stanmore facility. The outdated hospital layout of the past, with its Nightingale wards (large rooms without subdivisions for multi-patient occupancy) was replaced with modern single-patient rooms offering more privacy. Staff were accustomed to working and communicating in the Nightingale design with clear lines of visibility. Some were concerned they wouldn’t be able to communicate with each other efficiently in the new hospital building, due to the reduced lines of sight and new layout.

Two months after opening, Health Secretary Matt Hancock issued an order for all NHS hospitals to remove archaic technology, including pagers, for non-emergency communications before the end of 2021. RNOH quickly began the process to decommission pagers and replaced them with a communication platform that would unify staff.

RNOH leadership chose the Vocera Platform — an intelligent ecosystem that connects all the people and information needed to deliver patient care — due to its offerings of simplicity, rapid hands-free communication, and the ability for users to choose the device that works best for their role.

Before implementing Vocera technology, care team members would receive pager notifications initiated through a complex workflow. Clinicians that received notifications were tasked with finding a phone, calling the switchboard operator, writing down the message, repeating it back to the operator and responding accordingly.

“Pagers were falling to bits and had to be held together with tape. Additionally, some areas in the hospital didn’t have pager coverage.”

RNOH reported an 84% improvement in care team response times after replacing pagers with the Vocera smartphone app and hands-free communication badge. After deploying the Vocera solutions, mobilising the cardiac arrest team at the 220-bed hospital went from an average of two minutes to 20 seconds.

When the UK began to see cases of COVID-19 earlier this year, RNOH had to rapidly shift priorities and prepare for the impending patient surge.

“If I were to give anyone advice when planning for a pandemic or impending patient surge, it would be to unify your communications now,” explained Matt Phillips, Lead Clinical Practitioner, Acute Intervention.

During the peak of COVID-19, RNOH extended its pager replacement program, utilising the full potential of the Vocera communication platform. The hospital went from a controlled rollout to relying completely on Vocera solutions for all pagers, including all crash calls. The hospital also quickly shifted from focusing on and performing elective surgeries to preparing for and managing patient surges.

“In a 10-day period we turned our quiet, elective surgery hospital into the orthopaedic trauma centre for a large portion of north central London,” Phillips said.

“We suddenly went from caring for pre-assessed elective patients to having multiple trauma-related cases per week.”

A global leader in orthopaedic and spinal surgery, RNOH turned its private patient unit into a respiratory therapy unit where most of the COVID-19 patients were treated. The hospital equipped runners with wearable Vocera Badges to bring necessary supplies to clinicians treating patients in the makeshift isolation rooms. Runners could communicate with clinicians without having to enter the rooms, eliminating the need for the runner to don personal protective equipment (PPE).

“Vocera technology sped up communication and coordination during the peak of the COVID-19 crisis,” said Pauline Robertson, Head of Nursing for Medicine and Therapies.

“It helped us provide seamless patient care without risking infection, and we were able to conserve precious PPE.”

Vocera technology also helped staff stay connected to team members outside the hospital during the pandemic. Clinicians working in pop-up testing tents that the British Army set up in the hospital’s car park were equipped with Vocera Badges.

“If it weren’t for Vocera, we wouldn’t have had a way to quickly and easily communicate with staff working in our testing tents,” Phillips said.

“Vocera technology was brilliant because we didn’t have to worry about anything related to communication. We gave staff a badge, and we were instantly at peace knowing they had a secure means to communicate with each other and with the rest of hospital staff.”

What technologies are having an impact in aged care?

Areas where technological innovation is coming to the fore include assistive technology for...