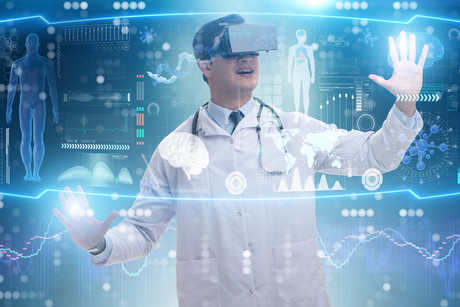 From microscopes and surgical navigation to cloud-based EHR solutions, technical innovation in the medical industry has always played a pivotal role in enabling better health outcomes for patients.

Virtual reality (VR), while long used as a buzzword in many sectors, has found a real-world application in the medical industry. In fact, a recent white paper by research firm Accenture found that “82% of health executives agree that extended reality (which includes VR) is removing the hurdle of distance in access to people, information and experiences” in health care.

VR has come a long way since the first prototypes were released, with new headsets offering vivid, life-like experiences all without the need for a dedicated computer, especially as 5G technology enables more mobile experiences. The applications for the medical industry are widespread and game-changing, particularly from a training perspective.

Already, Embodied Labs’ ‘We Are Alfred’ uses VR technology to show young medical students what ageing means. Everyone can be the hypothetical ‘Alfred’ for seven minutes, and experience how it feels like to live as a 74-year-old man with audio-visual impairments. The technology’s goal is to solve the disconnection between young doctors and elderly patients due to their huge age difference.

Meanwhile, giving birth has also been propelled into the virtual space with new innovations in both virtual reality and augmented reality developed by the University of Newcastle (UON). Using the Samsung GearVR and HTC Vive (VR) and HoloLens (AR) headsets, UON students will be among the first in the world to learn key anatomy changes, birthing techniques and real-world emergency scenarios via virtual and augmented simulation.

Of course VR won’t necessarily replace hands-on training, but it can become a powerful tool to complement existing learning. Already we are seeing some great innovations in this area that are set to be rolled out and developed even further to empower the next generation of health professionals.

A recent survey by MedicalDirector revealed that patients expect better doctor–patient consultations. 90% of respondents ‘want a fact sheet from their GP explaining their condition and how to better manage it’ and 70% think healthcare providers can ‘better use digital tools, mobile technology and the internet to improve patient experience’. The findings are clear — patients are demanding more information and greater use of consumer technology, a pain point that could be addressed by VR.

Imagine a consultation where the medical professional is able to show the patient their diagnosis through VR. This is already becoming a reality with applications like Body VR, which turns CT and MRI scans into immersive VR experiences. Augmented reality (AR), an experience where information is overlaid on top of real life, can also assist with patient diagnosis. For example, EyeDecide is an AR application that can simulate various vision impairments so that patients can better explain their symptoms.

These innovations will also open up fresh opportunities to better facilitate patient engagement and offer a more personalised approach to the patient experience. It’s an exciting new way for patients to understand more about their condition, treatment or what to expect in their upcoming procedure.

Early VR trials at Cedars-Sinai Hospital in Los Angeles have shown a 25% reduction in pain for patients suffering from a range of ailments from joint injuries to cancer. There are even hopes that VR could be used an alternative to opioids, which claim the lives of nearly 100 people every day.

Researchers at the University of Southern California have developed a VR experience called ‘Bravemind’ that is being used to treat war veterans with PTSD by immersing patients into virtual environments representative of their traumatic experiences in a controlled, stepwise fashion.

While many of these trials are still in the early stages of development, they point the way forward for a technology that has the ability to make a lasting difference for patients and professionals around the world.

The future of VR in health

VR in health care is still in its infancy and, unlike the consumer world, the healthcare industry has a much higher regulatory and ethical liability — which can increase the time it takes for us to see mass adoption of this technology in the industry.

However, the vast applications of VR in the healthcare space shows that the future of the technology is bright. It is little wonder, then, that 83% of health executives agree that extended reality will create a new foundation for interaction, communication and information. The next step forward is for further collaboration between the medical community and VR manufacturers to ensure the technology meets the needs of the industry both now and into the future.