Can artificial intelligence help reduce the rate of bowel cancer? 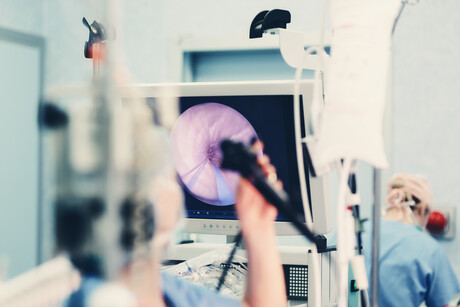 It sounds like something out of a sci-fi movie. Computers scrubbing in on medical procedures? But the future is, in fact, now.

Gastroenterologist and therapeutic colonoscopist Dr David Hewett, who is also an Associate Professor at the University of Queensland Faculty of Medicine, contributed videos to Olympus to develop an algorithm to detect polyps. The technology is similar to facial recognition with an iPhone or camera, so it flashes and tells you whether there’s a lesion on the screen.

According to a report published by Cancer Australia, the estimated number of new cases of colorectal cancer diagnosed in 2020 in Australia was 15,494. Of those, 8340 were men and 7154 were women.

These figures represent 11% of all new cancer cases diagnosed in 2020. Among those, around one in three are estimated to have died from this disease.

AI assists doctors when performing procedures to reduce the chances of missing anything. The research around this technology reports this will have a transformative effect on clinical practice, with a 10% increase in the detection rate, reducing the failure rate of colonoscopy to find polyps and improve the cancer survival rate.

The technology is exciting because it adds an additional level of security for the doctor who is conducting the procedure.

Specialists using the new technology have described it as very straightforward. Just as a smartphone or digital camera recognises facial features, the ENDO-AID CADe has a flashing green box that indicates if there’s a polyp on the screen in front of the colonoscopist.

Unlike the much-lauded driverless cars, which seem closer to fruition than we may think, doctors are not obsolete with the introduction of AI technology and still require a refined colonoscopy technique.

The purpose of AI is to allow them to pick up small polyps that might otherwise go undetected by the human eye. It also may allow the doctor to identify, at an earlier rate, what might be happening in the patient’s experience.

Without this technology there is a possibility that a tiny, subtle lesion may go undetected.

When patients come in for their regular colonoscopy, or their first colonoscopy, they not only have a great procedural specialist, but an additional technology in place that allows the doctor to identify smaller and earlier potential issues with polyps and cancers. The technology may also give the specialist confidence that they can lengthen the time between colonoscopies for those patients requiring frequent monitoring procedures.

In Australia, and more specifically Chermside Day Hospital, we now have access to the best technology in the world for doing these procedures.

It’s all about improving quality of patient outcomes.

In the future, AI looks like it is going to support doctors in a whole range of healthcare procedures, such as generation of reports and measuring the quality of procedures.

AI has the potential be a game changer in colonoscopy.