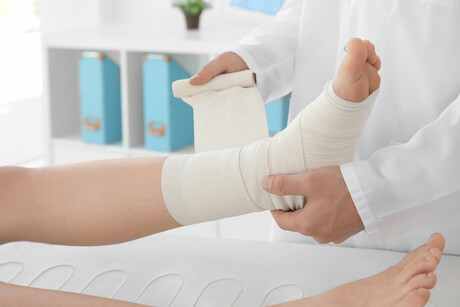 After three months in hospital and a third attempt at a split skin graft (SSG) to her chronic right leg ulcer, 70-year-old Jan was transferred to her regional Victorian town hospital for ongoing wound care and rehabilitation. She lived alone and was supported with her activities of daily living by community nursing care.

With a long history of wound care, Jan and the community nursing team identified that “every dressing type” had been used to try and heal her wounds. Jan’s medical history included atrial fibrillation, cardiac arrest, chronic kidney disease, defibrillator, hypothyroidism and lymphoedema.

The ulcer was a long-standing wound of approximately 12 years with two previous failed SSGs — unfortunately the third SSG also failed. Jan’s hope for wound healing was fading. She was becoming despondent that her wound would ever heal and her level of confidence in new products was dwindling, as well as her willingness to allow yet another clinician to make a wound-care plan.

After identifying that the third SSG was nonviable, Jan was referred to the Local Health District Wound Management Clinical Nurse Specialist (CNS). Due to geographical distance and COVID 19 travel restrictions, face-to-face reviews were not possible so weekly telehealth reviews were conducted.

On first referral to the Wound Management CNS the wound bed was 70% slough, 30% granulation, with maceration to the wound edges and peri wound. A large amount of serous exudate and hyperkeratosis to the peri wound and surrounding skin was evident and the edges were nonadvancing.

An open discussion was held with Jan to identify her goals. Jan was hopeful that her wound would heal despite her comorbidities and previous failed SSGs. An emphasis was placed on appropriate wound hygiene, deterrence of bioburden and exudate reduction. The nursing team providing the wound care worked closely and diligently with the CNS and escalated any concerns. The Wound Management CNS provided videoconference education to the nursing staff on each dressing product and wound hygiene.

Wound hygiene was addressed with thorough wound-bed cleansing with a polyhexanide (PHMB) solution, mechanical debridement of non-viable tissue from the wound bed and hyperkeratotic skin from the peri wound and surrounding skin. The skin integrity was supported with regular skin cleansing and moisturising.

The chronic wound bioburden and non-advancing wound edges were managed with a topical antimicrobial primary dressing. The exudate level was controlled with appropriate super-absorbent secondary dressings and reduced by Jan performing lower-leg exercises, elevating her legs throughout the day and wearing lymphoedema compression stockings. She had previously ceased wearing her stockings due to poorly controlled exudate leaking through and increased pain to the wound area.

Zorflex®, an antimicrobial, conductive and odour adsorbing primary dressing, was used as the primary dressing, as a topical antimicrobial and to assist in transepithelial potential. Impervia® Neosorb was used as the secondary dressing to manage the exudate levels and reduce maceration. Initially the maceration continued; however, this was reduced by staff encouraging Jan to elevate her legs and by cutting the Zorflex to the size of the wound bed without any overlapping onto the peri wound area.

When nursing staff attempted to remove the Zorflex after three days, they found it was adhered to the wound bed. The patient become concerned about this and lost confidence in the product and wound-care plan. Reassurance was given to the patient and the nursing staff, and it was agreed to extend the frequency of changing the Zorflex to every four to five days, with the Zorflex soaked in saline for 15 minutes prior to removal to allow it to be lifted away with ease.

By the next dressing change the wound had improved, with several islands of epithelial tissue, reduced maceration and a boost to Jan’s confidence in both the product, the CNS and nursing staff, and a glimmer of hope for wound healing. With Jan’s new-found healing and reduced pain came improved compliance with elevating her legs and wearing her prescribed stockings. The Zorflex continued to be changed every four to five days and the Impervia Neosorb changed every one to two days.

Three weeks into the wound-care plan the donor site deteriorated, with a 4 x 4 cm serous filled blister developing at the proximal area of the donor site. This blister self-deroofed leaving an open wound that was painful and worrying for Jan. Initially a hydrocolloid dressing was used over the donor site wound breakdown; however, this was soon changed to Zorflex and Impervia Neosorb as the level of exudate was too great. The frequency of change for the donor site wound dressings was also every four to five days. Zorflex was used on the donor site to promote epithelial migration.

Jan’s donor site wound also progressed well, with 100% of the site epithelised within three weeks of using Zorflex and Impervia Neosorb. Once exudate levels reduced at the donor site the Neosorb was stepped down to Osmocel® Hydroporous Foam.

One week prior to Jan’s discharge, a telehealth meeting was held to agree upon the ongoing wound-care plan.

Despite many years of failed wound healing, reduce hope and trust in wound care, Jan’s wounds showed significant healing with a comprehensive and consistent plan. The person-centred team approach also gave the opportunity for Jan to be an active part of her wound care and the team were able to develop their knowledge and skill set. The combination of products, nursing care and Jan’s active participation in improving venous return through leg elevation, exercises and compliance to wearing her lymphedema compression stockings finally turned healing in a positive direction.

At NNT, we are committed to creating uniforms that foster safety and confidence in our healthcare...

An accurate weight can help save a life

While safe practice protocols tell us an accurate weight measurement is important to avoid...

Induction technology has been around for some time, but now with its breakthrough induction...