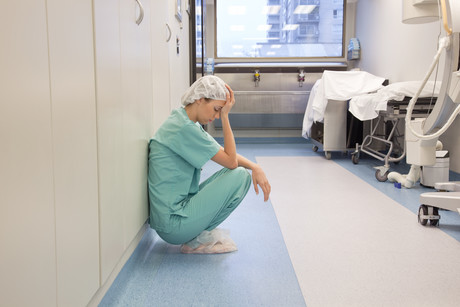 When nurses feel as though they’re not receiving enough support at work, they are more likely to experience anger and, consequently, injury.

This is according to a new study  published in the journal Work and Occupations, in which researchers found that an imbalance in support among nurses at work led to tempers flaring and the risk of injuries increasing.

“Beyond the physical demands of the job, social factors can pose additional risks for nurses to experience muscle and joint pain in the shoulders, arms, hands and lower back,” said co-study leader Chu-Hsiang (Daisy) Chang, associate professor of psychology at  Michigan State University (MSU). “These types of musculoskeletal disorders often are worsened by feelings of anger.”

Social factors can include perceptions around how much support someone is giving their co-workers and whether they perceive that same support is available to them. Types of support can come in many forms, including showing empathy and concern, offering advice, guidance and suggestions, or providing a helping hand.

“The imbalance occurs when nurses believe that the support they’ve received is less than what they’ve given to their co-workers,” said co-lead researcher Liu-Qin Yang, associate professor of industrial-organisational psychology at  Portland State University. “This imbalance results in nurses being angry at their peers and overall work situation.”

Nursing often ranks among the worst occupations in terms of work-related injuries because of the physical demands during long, 12-hour shifts.

The study surveyed more than 400 nurses in two hospitals from 29 different units to further explore the effect psychological factors in a work environment had on physical health. It found that when nurses believed they should receive the same amount of support uniformly, tempers rose if an imbalance occurred.

“If the norm is that everyone gets the same amount of support, then an individual nurse who experiences an imbalance might wonder why she’s being singled out,” Yang said. “She’ll feel worse and angrier.”

In instances where differences in support is the expectation, then lower levels of anger were reported.

Yang said that in this scenario, individual nurses are less sensitive to an imbalance of support at the personal level.

“Hospitals need to implement strategies and interventions that are designed to improve the social environment for nurses,” Chang said. “Doing so may not only improve psychological wellbeing and reduce their stress, but also promote their physical health.”

According to Chang, hospitals use a variety of solutions to address injuries, but they focus more on physical job tasks to eliminate risk, such as using lift devices to help transfer patients from a bed to a wheelchair.

“Ensuring fair treatment or distribution of workload in a social context could be a good strategy that can reduce feelings of anger and, ultimately, have an indirect effect on reducing injury complaints, too,” Chang said.

Australia's general practitioner (GP) workforce will be undersupplied to the tune of 9298...