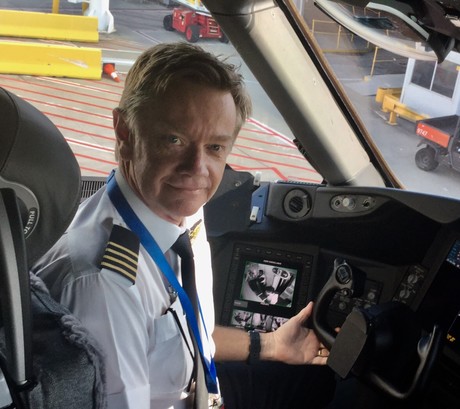 During my working life, I have had the privilege of experiencing the worlds of health care — through my nursing training — and aviation, flying international airliners as a Flight Training Captain. This diverse background has given me valuable insight and an appreciation for the parallels of these workplaces.

The similarities shared by an aircraft’s flight deck and an operating theatre or medical unit are multiple. Both groups consist of highly skilled professionals who are actively driven to provide the safest outcomes for those in their care; both rely heavily on rapidly advancing technologies, and each has a well-defined team structure.

The flight deck is made up of the Captain, First Officer and Second Officer or Officers, and the operating theatre or medical unit is home to specialists, registrars, residents and interns, anaesthetic staff, theatre nurses and various technical staff. Most importantly, both groups are made up of human beings who are susceptible to vulnerabilities such as fatigue, distraction, illness, overload, the ageing process and team personality dynamics, all of which can have an impact on performance.

Over the past 30 years, aviation pilot training has experienced an enormous change in focus — beyond the technical skills required to fly aircraft to acknowledging the vulnerabilities of the human condition. This change in focus was largely due to a series of major, catastrophic aircraft accidents, which led to an increased awareness of ‘human factors’.

Human factors training, or more specifically ‘crew resource management’, examines how people act and react when exposed to a variety of challenges — such as fatigue, distraction and team dynamics — proposing strategies to minimise their impact on flight safety.

Our ability to make appropriate decisions, effectively communicate and operate as a team, maintain the overall vision and minimise errors can be affected by long duty hours and shift work, personal illness, private life domestic issues and team hierarchy dynamics.

Accepting our human vulnerabilities is only a starting point. Aviation has made significant progress in the area of ‘threat and error management’. This area is used to identify potential threats to an operation and determine possible mitigation measures before committing to manoeuvres such as take-off or landing.

Examples of potential threats could include long tours of duty and the subsequent ensuing fatigue, or weather-related issues such as thunderstorms in the vicinity of the airport. It might also identify crew members’ lack of experience on that particular aircraft. A possible mitigation measure to the lack of experience of junior crew members would be to encourage them to speak up if they are in any doubt about a particular issue or if there is a risk an error could occur.

For this to be effective, senior crew must provide an environment where other members feel comfortable sharing input. Prior to human factors training, communication among flight crew members was often stifled by rank. The Captain of the aircraft was the most experienced pilot and their decisions and actions were rarely questioned.

The environment that modern aircraft commanders endeavour to establish is one that encourages an open and honest flow of information among the team members, especially in the case where a team member is expressing concern or bringing to the attention of others potential threats to the safe continuance of the flight.

For some time now, medicine and surgery has begun to adopt aviation-style practices such as the use of checklists, simulation training and the introduction of the ‘pre-incision timeout’ procedure. It is my great hope that medicine and aviation can continue to share knowledge to refine procedures such as these, producing safer outcomes for our patients and passengers.

*Geoff Hay is a commercial airline pilot and former nurse, with more than 30 years in the cockpit. For the last 20 years he has trained pilots to fly, focusing on the human behavioural element in addition to basic flight skills training.

Prior to his flying career, Geoff completed general nursing training at the Royal North Shore Hospital in NSW followed by specialisation in Paediatric ICU at the Royal Children’s Hospital at Camperdown and working in operating theatres throughout NSW.

Geoff published his first book, ‘Ladies and Gentlemen, this is your Surgeon speaking’, in 2019. He can be contacted at geoffhay@supersonicperformance.com.au.