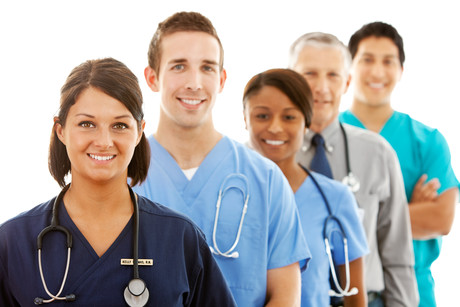 Health care is one of Australia’s largest occupational groups, directly employing almost 1.2 million people. An ageing population, along with high population growth, has created huge demand for healthcare and aged-care services across the country. In the process, it has created a headache for Australian recruiters.

Skill shortages are prevalent across health care and are often difficult to address as many roles require extensive education and qualifications. The consequence of these shortages can, quite literally, be life or death.

Scarcity of nurses, doctors or specialists means that some Australians do not receive the care they need, at least not in a timely manner. This is particularly concerning right now given the spread of coronavirus (COVID-19), which is highly demanding on healthcare personnel and threatens to push the Australian healthcare system to its limits.

Meanwhile, a lack of carers also puts older Australians at risk. For example, the median waiting time for senior Australians to be admitted to residential aged care increased to 152 days in 2018–19 from 45 days five years earlier.

Using Indeed data and other sources, we identified which healthcare roles are hardest to fill, also noting the declining use of skilled visas to recruit staff from other countries. In addition, we took a deep dive into arguably the most important occupation in any well-functioning healthcare system — registered nurse.

Over the past five years, almost 17% of Australian jobs created were in health care, more than any other sector. Today, 9.2% of Australian workers work in healthcare occupations — a number that is certain to grow throughout the 2020s.

In 2019, health care accounted for 10% of Indeed Australian job postings, up from 9% two years earlier. Registered nurse is the most common healthcare occupation, accounting for almost 19% of healthcare job postings last year. Pharmacist and physiotherapist round out the top three.

Imbalance between employment opportunities and jobseekers

Indeed data show a large mismatch between work opportunities and jobseeker work histories across the healthcare sector. Some roles have relatively few candidates, perhaps evidence of skill shortages, while others have many candidates relative to available jobs.

The hardest healthcare roles to fill are occupational therapist, mental health technician and midwife. In addition, three separate nursing roles feature in the top 10. Just outside the top 10 is general practitioner.

These hardest-to-fill roles are all well paid and require extensive education and qualifications, making the imbalances difficult to address. Even if universities were to enrol more medical students, it would take five to 10 years for the number of qualified jobseekers to increase.

On the other side of the coin, some healthcare occupations are relatively easy to fill. Most of these are junior or entry-level positions with fewer qualifications. They include two nursing assistant roles, phlebotomist and care assistant. Some of these roles have more candidates than jobs to fill, which means strong jobseeker competition for available opportunities.

But positions with jobseeker surpluses are exceptions. Over 90% of the roles we examined had more jobs than resumés — even some of the roles considered easiest to fill.

Stiff competition to hire qualified workers means rising pay. The healthcare and social assistance category has higher wage growth than any other sector and is the only one in Australia in which wages are growing above their average over the past decade. Employers are bidding up wages to attract more candidates, both domestically and from abroad, while also trying to lure candidates from other industries.

Can foreign workers fill the gap?

Despite clear skill shortages, health care is not utilising foreign talent as much as it once did. The number of skilled visas awarded annually for healthcare positions has fallen dramatically since its peak in the 2011–12 financial year. Today, skilled visa holders account for just 0.6% of industry employment, down more than half from a peak of 1.4% in March 2013. 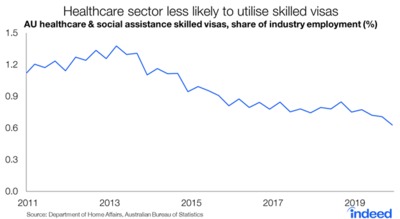 For Australian employers, a key issue is that healthcare professionals are in high demand worldwide. Australia isn’t the only country grappling with the challenge of an ageing population and rising demand for healthcare services. Attracting foreign talent is difficult when jobseekers can choose where to live and work.

Nurses play a pivotal role in any well-functioning healthcare system. When there is a shortage — and there almost always is — people who need medical care get put on waiting lists or turned away altogether.

High staff turnover forces many hospitals to advertise almost constantly for new nurses. Registered nurse consistently ranks as one of Australia’s most heavily advertised occupations. The job posting share for registered nurse has also outstripped its jobseeker resumé share, highlighting the imbalance between demand and supply. 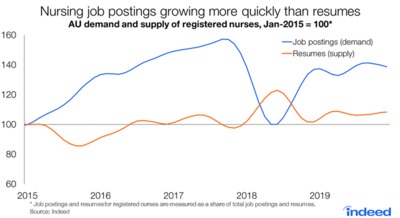 A 2014 Department of Health report projected a shortfall of 85,000 nurses by 2025 and 123,000 by 2030. Over time, this deficit could undermine Australia’s healthcare system. And nursing is far from the only healthcare occupation facing chronic shortages. Our analysis finds scarcity of qualified candidates is the norm.

Still, Australia has no choice but to deal with this problem. We need to boost training and education and we must raise salaries to draw more talent. Huge investment is required to build capacity. Productivity must increase to use staff more efficiently. With the demand for healthcare services rising steadily, failure to address these shortages will weigh on the health and wellbeing of Australians for many years to come.

A day in the life of nurse Lisa Russell