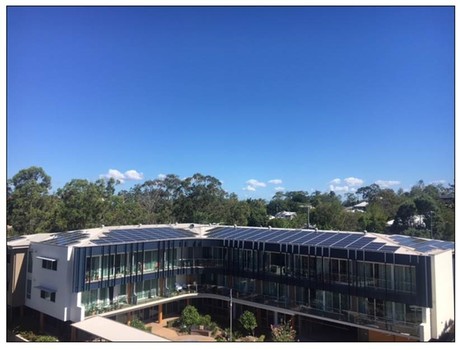 St Vincent’s Health Australia (SVHA) has embarked on its National Energy Action Program (NEAP), an ambitious program to reduce total electricity use and carbon emissions. A major component of the program will be the installation of a 2.708 MW rooftop solar system across 16 of its hospitals and aged-care facilities in New South Wales, Victoria and Queensland.

NEAP aims to reduce SVHA’s annual electricity consumption by around 40 GWh (gigawatt hours) by mid-2018. This represents a 35–40% reduction of current consumption and will deliver a cost saving of approximately $6.5 million annually while reducing greenhouse gas emissions by 40,000 tonnes per annum.

NEAP has three main components: the rollout of solar panels across 16 sites; implementing a wireless system for energy management and appliance control across facilities; and retrofitting more than 40,000 existing incandescent and fluorescent lighting with LED alternatives.

The solar rollout SVHA is undertaking is claimed to be the largest commercial installation of its kind in Australia. It is expected to be completed by the end of 2017. An estimated 9180 solar panels will be mounted by Todae Solar and will annually produce approximately 4 GWh of electricity.

Once completed, the system will have a daily average production of over 11 MWh of electricity, which is enough to power approximately 662 homes. It will also feature cutting-edge monitoring technology that will provide real-time data on the system’s performance.

“With the increasingly clear link between environmental degradation, climate change and related health impacts, addressing environmental issues is showing care and compassion for people as well as the earth. We take this responsibility seriously,” said Bryant.

“Health and aged care generally, and hospitals in particular, are very energy-intensive. Hospitals can be up to 4.5 times more energy-intensive, on a metre-squared basis, than the equivalent office space. At the same time, price rises for both gas and electricity in Australia have seen the cost of energy grow substantially,” he explained.

“SVHA as an organisation currently consumes approximately 113 gigawatts of electricity annually — equivalent to the domestic consumption of a town of 50,000 people. We produce greenhouse gas emission of 125,000 tonnes annually,” he said.

“As for the wireless system for energy management and appliance control, we’re working with Plugwise Australia to install 25,000 modules across facilities which prevent unnecessary energy consumption by intelligently switching off lighting or appliances when they’re not required.

“The modules will also measure the energy consumption on a device level and provide detailed information on how often a piece of equipment is used,” Bryant said.