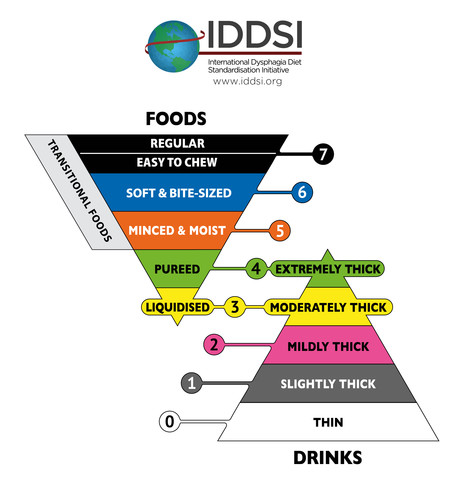 Dysphagia affects both the young and old, and represents a significant risk to their safety and wellbeing. From 1 May 2019, new international standards will replace the existing Australian ones. We outline the changes and their importance.

Eating and drinking is something we do 500–700 times a day without thinking about it.1 We trust that food, drink, saliva and medicine will pass through the mouth, throat and oesophagus, arriving safely at the stomach.

Yet for about 8% of the population, this simple daily act is a problem where food and drink can get into the lungs and cause chest infections like pneumonia.2 Sometimes the problems are so severe that regular food and drinks can become a life-threatening choking risk.

Dysphagia — not just a problem for the aged

This problem, known medically as ‘dysphagia’ (pronounced ‘dis-fay-ja’), affects people of all ages however — babies and children at one end of life’s continuum and the elderly at the other end are most often affected.

Conditions such as premature birth, cerebral palsy, autism, brain injury, cancer to the mouth or throat, stroke, dementia, Parkinson’s disease and other conditions are associated with swallowing problems and risks such as poor nutrition, dehydration, risk of chest infection and sadly, choking.

Dysphagia affects about 25–55% of babies born prematurely, 60% of children with a developmental disability, around 50% of stroke survivors and 84% of people with dementia.3-6

Unlike heart disease or breathing problems, dysphagia is a medical orphan, with no one medical group that specialises in the condition. Speech pathologists assess and manage dysphagia, while dietitians ensure people with dysphagia receive adequate nutrition and hydration.

We are well aware of choking risks for small children; however, it is less well known that the risk of choking on food is 7x higher for people over the age of 65 years than it is for 1- to 4-year-olds.7

To keep children and adults with chewing and swallowing problems safe, food and drinks are often changed so that it is easier and safer for swallowing. Based on clinical assessment by a speech pathologist, foods are chopped, minced or pureed and drinks are thickened.

The way we name and describe the modified food and drinks is really important, to make sure that each person receives the food texture and drink thickness that is safe for them.

The NSW Ombudsman’s Reports into reviewable deaths of people with disability in residential care (2012–2013 and 2014–2017) indicate that improving identification and management of swallowing risks, and better communication about food textures that are safe for people with dysphagia are some of the keys to preventable choking deaths.8,9

Chewing and swallowing problems affect 30–50% of residents in aged-care facilities with choking being the second-highest cause of preventable death.10

Transitioning to the new standards

In Australia we have had national terminology for these special food textures and thickened fluids for people with swallowing problems since 2007. In 2015, the International Dysphagia Diet Standardisation Initiative (IDDSI) released the IDDSI Framework to provide safety through a global standardised way of naming and describing food texture and drink thickness for people with swallowing difficulties across the lifespan (see top image).

In addition, IDDSI uses simple, quick, portable, reliable measures rather than relying on descriptions like ‘soft’ to make sure that foods and drinks are safe. Children and adults have choked and died on food textures that were not appropriate for their swallowing needs.11

We are changing from the Australian National Standards for texture modified food and thick drinks to the IDDSI Framework that represents global, evidence-based best practice.

IDDSI has adopted an AWARE-PREPARE-ADOPT strategy to assist with implementation. Australia is currently in the PREPARE phase and is set to ADOPT on 1 May 2019. What do the changes mean for you or Australia?

Many manufacturers of thick drinks and food for people with chewing and swallowing difficulties are updating their labels so that they are aligned with IDDSI from 1 May 2019. Finally, bread and sandwiches that were often included in the Australian Texture A Soft are not included in the IDDSI Level 6 Soft & Bite-sized diet because of their high choking risk, a reason sadly highlighted in coronial inquests.12-14

Implementation of the IDDSI Framework is voluntary best practice to improve safety, just as the Australian 2007 standards have been voluntary best practice. The IDDSI Standards are supported by peak bodies involved in the care of people with chewing and swallowing difficulties such as Speech Pathology Australia, Dietitians Association of Australia and the Institute of Hospitality in HealthCare.

The new IDDSI standards allow for consistent communication that has been identified as a key factor for safety15. The IDDSI Framework was adopted in New Zealand in 2018. It will be adopted by Australia, Canada, the UK and the USA in 2019.

The IDDSI Framework has so far been translated into 17 languages other than English and is supported by a number of resources including consumer handouts, posters, webinars and publications. There is a specific section for Australia on the resource page as well. In Australia the implementation of IDDSI is being supported by a steering committee and a Project Officer.

*Dr Julie Cichero is a speech pathologist internationally recognised for her work in feeding and swallowing disorders; she is Co-Chair of IDDSI International and the Australian IDDSI Project Officer.

In her presentation, Chief Nursing and Midwifery Information Officer Kate Rezenbrink will discuss...

Devices like wristband and label printers are crucial for accuracy and efficiency in patient...