Doctors' desperate plea for an end to bombing of hospitals in Ghouta, Syria 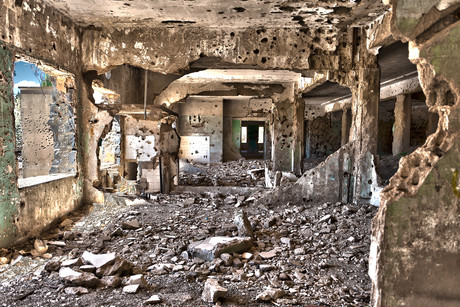 Despite and internationally brokered ceasefire reached on 30 December 2016, there has been no movement to end the suffering and death of civilians in Syria. Hospitals and clinics are being overwhelmed by normally preventable diseases as residents face a complete lack of access to lifesaving medication, supplies and adequate nutrition.

Airstrikes and indiscriminate bombardment of civilian areas with suspected chemical weapons has led medical staff and doctors to sent out a desperate plea for NGOs to demand an immediate end to the indiscriminate bombardment of Eastern Ghouta in the Damascus suburbs. Hospitals and medical facilities are unable to keep up with the constant influx of casualties from airstrikes and bombings, citing many deaths and many losing limbs from the attacks.

Many chronically ill patients in Ghouta face death, especially patients with renal failure as supplies for dialysis are very low.

The Department of Hemodialysis in the Specialized Hospital in Damascus Countryside is the only department that performs hemodialysis sessions in besieged East Ghouta. This facility was established in 2013, using equipment unearthed from under the ruins of Douma’s decimated public hospital. The hemodialysis facility first ran out of supplies in 2015, and has lost five patients since then because of the siege.

This facility depends on the ability of the World Health Organization (WHO) to bring critical dialysis supplies to the area, yet no aid convoy has been allowed to enter Douma since October 2016.

Dr Khaula Sawah is CEO of UOSSM (Union des Organisations de Secours et Soins Médicaux) USA, an organisation providing free medical aid to the people of Syria. Dr Sawah said, “We are very concerned with the escalation of attacks in Ghouta, and Waar, the areas have been under siege for over six months. It is vital that medications and equipment be allowed in these areas as many patients require certain medications in order to survive. We demand that the international community call for an immediate halt to the indiscriminate bombing and targeting of area hospitals and facilities, and the immediate entry of medical supplies and equipment desperately needed by people in these areas.”