World-first lung scanner installed at the Prince of Wales Hospital 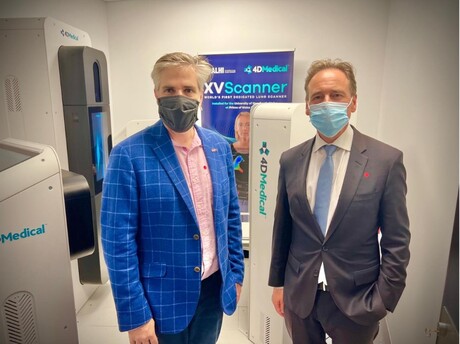 The world’s first dedicated lung scanner, XV Scanner, developed by local researcher Dr Andreas Fouras, has been installed at the Prince of Wales Hospital in Sydney.

The scanner uses an automated scanning process to produce detailed lung function information in real time, and will help people living with lung conditions such as chronic obstructive pulmonary disease, cystic fibrosis and asthma. It is said to help with early disease detection and accurate monitoring of chronic respiratory conditions.

The XV Scanner will be used by researchers and clinicians from the University of New South Wales (UNSW) and the Sydney Children’s Hospital, including lung health expert Professor Adam Jaffe, who is currently the John Beveridge Professor of Paediatrics at UNSW.

Dr Fouras, Founder and Chief Executive Officer of 4DMedical, described its development as a “transformative moment in lung health history”.

Minister for Health and Aged Care Greg Hunt said the government had provided $28.9 million through the Medical Research Future Fund’s (MRFF) Frontier Health and Medical Research Initiative to develop and commercialise the scanner. “The development of the XV Scanner is a wonderful example of Australia again punching above its weight in the world of health and medical research,” Minister Hunt said.

Dr Fouras said the XV Scanner would not have been possible without the MRFF investment. The XV Technology software is already being commercialised, while the scanner remains on track for clinical deployment in late calendar 2023.

Coupled with 4DMedical’s XV Technology, the device provides detailed quantitative data on respiratory function via an automated process, which delivers important advantages in other areas as well, including: rapid scan times, which improve patient experience and also deliver increased throughput, thereby improving the economics for healthcare providers; and increased access to XV Technology for more patients, including children, the elderly and the very unwell.

The successful placement of the scanner at the Prince of Wales Hospital means 4DMedical has designed, built and deployed the first XV Scanner in an Australian hospital within 12 months of MRFF funding, meeting the ambitious target communicated to the market at the time. Importantly, engineering research and development has been completed in-house and within budget, resulting in the creation of a significant body of intellectual property.

4DMedical is now working with leading medical researchers to progress a series of clinical trials that will take the XV Scanner towards regulatory clearance by late 2023. Success here will give 4DMedical a superior product offering accelerating penetration of the global respiratory diagnostic market currently valued at more than US$31 billion a year.

4DMedical CEO & Founder Dr Andreas Fouras and Federal Minister for Health and Aged Care Greg Hunt MP at the Prince of Wales Hospital in Sydney, for the unveiling of 4DMedical’s XV Scanner (pictured).