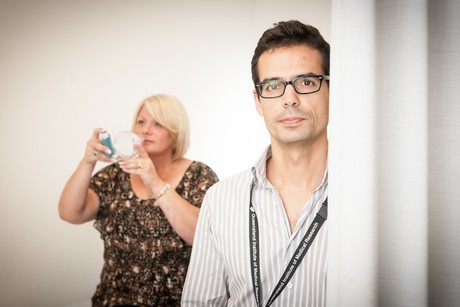 Scientists have uncovered which genes predispose people to asthma, hayfever and eczema, in a major international study pinpointing more than 100 genetic risk factors.

Led by Dr Manuel Ferreira from the QIMR Berghofer Medical Research Institute in Queensland, the study has been published in the prestigious journal Nature Genetics.

Dr Ferreira said this was the first study designed to find genetic risk factors shared among the three most common allergic conditions.

“Asthma, hayfever and eczema are allergic diseases that affect different parts of the body: the lungs, the nose and the skin,” Dr Ferreira said.

“This is important to know because it tells us which specific genes, when not working properly, cause allergic conditions. This knowledge helps us understand why allergies develop in the first place and, potentially, gives us new clues on how they could be prevented or treated.

“We analysed the genomes of 360,838 people and pinpointed 136 separate positions in the genome that are risk factors for developing these conditions.

“If you are unlucky and inherit these genetic risk factors from your parents, it will predispose you to all three allergic conditions.

Dr Ferreira said those 136 genetic risk factors influenced whether 132 nearby genes were switched on or off.

“We think that these genes influence the risk of asthma, hayfever and eczema by affecting how the cells of the immune system work,” he said.

“Importantly, we have identified several drugs that we believe could be targeted at some of these genes to treat allergies. The first step would be to test those drugs in the laboratory.”

The study also examined if environmental factors might affect whether these genes are switched on or off.

“We found that this could be happening for many of the genes we identified,” Dr Ferreira said.

“For example, we found one gene — called PITPNM2 — that is more likely to be switched off in people who smoke. If this gene is switched off, then the risk of developing allergies increases.”