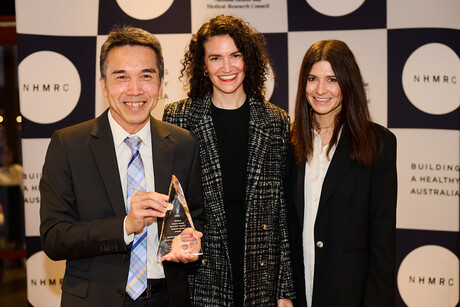 The newly named award is in remembrance of leading HIV/AIDS researcher Professor David Cooper AC FAA FAHMS (1949–2018). TROG Cancer Research President Professor Trevor Leong said, “To be the inaugural winner of this award is incredibly humbling. It represents the culmination of many years of hard work by hundreds of trial staff, clinicians and patients across the globe, and it’s great to see this recognised alongside the work of Professor Cooper.”

NHMRC noted Professor Leong’s work with TROG Cancer Research and the Australasian Gastro-Intestinal Trials Group (AGITG) on the TOPGEAR Phase III trial (Investigating the use of preoperative chemoradiotherapy versus preoperative chemotherapy for respectable gastric cancer), which opened to patients in 2013 as an important research question worthy of government funding.

“This trial was dedicated to answering important questions about the best use of chemotherapy and radiation therapy, in addition to surgery, for gastric cancer,” Leong said.

Professor Leong was announced TROG Cancer Research’s President in 2021 after fulfilling the role as the Chairperson of TROG’s Scientific Committee. Previously, he was the Director of Radiation Oncology at the Peter MacCallum Cancer Centre in Melbourne. As a Consultant Radiation Oncologist, he is internationally recognised as a leader in the management and research of gastrointestinal cancers and is an active clinician researcher engaged in both translational research programs and clinical research, with a focus on radiation medicine research.

Professor Leong has been involved with TROG activities for almost 20 years in the positions of Trial Chair, member and Chair of the TROG Scientific Committee and Board Director, as well as being a key contributor to clinical trial radiation therapy quality assurance.

TROG Cancer Research CEO Susan Goode spoke fondly about working directly with Professor Leong and congratulated him on this huge milestone. “I have had the pleasure of working side by side with Trevor on a number of trials, but most recently as our President, he has been providing leadership for TROG Cancer Research, ensuring that our research endeavours in radiation medicine make a significant contribution to cancer control and improving patient outcomes. There is no-one else more deserving of this award in its first year,” she said.