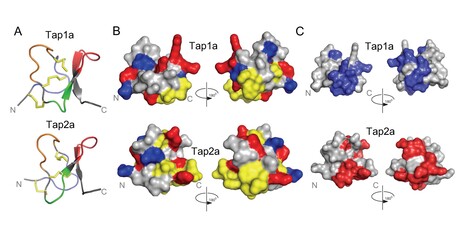 Researchers from The University of Queensland’s Institute for Molecular Bioscience (IMB) have discovered that molecules from the venom of one of the world’s largest spiders could be used to develop pain blockers for people with irritable bowel syndrome (IBS).

Of 28 spiders screened by the research team, the venom of the Venezuelan Pinkfoot Goliath tarantula — which has a leg span of up to 30 cm — showed the most promise. The findings are published in the journal Pain.

“All pains are complex but gut pain is particularly challenging to treat, and affects around 20% of the world’s population,” Professor Lewis said.

“Current drugs are failing to produce effective pain relief in many patients before side effects limit the dose that can be administered.”

Professor Brierley said IBS and other gastrointestinal and bladder disorders cause chronic visceral pain, which affects the internal organs.

“Internal organs have a complex network of sensory nerves that have a wide array of voltage-gated ion channels and receptors to detect stimuli,” he said.

“The hypersensitivity of these nerves in disease often contributes to the development of pain.”

Voltage-gated ion channels open and close in response to changes across the cell membrane, with their dysfunction identified as a cause of chronic visceral pain.

“Our goal was to find more specialised pain blockers that are potent and target pain sodium channels for chronic visceral pain, but not those that are active in the heart and other channels.”

The team found two peptides isolated from the tarantula venom inhibited the most important ion channels underlying pain, with one particularly potent at reducing the sensory nerves of the bladder and colon and nearly stopping chronic visceral pain in a model of IBS.

“We now have a really strong understanding of the structure and function of these spider venom peptides,” Professor Lewis said.

“The highly selective ones have potential as treatments for pain, while others are useful as new research tools to allow us to understand the underlying drivers of pain in different diseases.”

The research, funded by the National Health and Medical Research Council, evolved from 15 years of studying the potential of medicines developed from venoms.

How long until the leading vaccines make it to market?

Pfizer and BioNTech may face major hurdles in getting their vaccine to market, despite recently...

Call out to Queenslanders for OCD clinical trial

Which prescription medicines are most commonly used in Australia? Which have the greatest cost to...

Help in working through the workplace regulatory maze