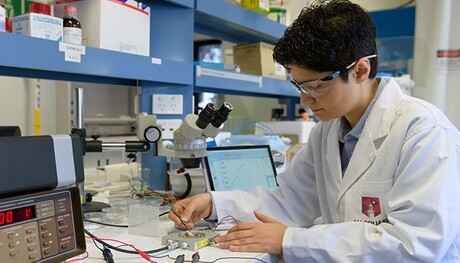 The tiny device — designed by Head of Macquarie University’s NanoTech Laboratory Dr Noushin Nasiri — is about the size of a fingernail and measures someone’s sun exposure, alerting them when they’ve exceeded the limit for their skin type. 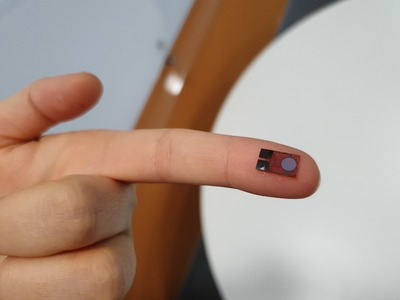 The real-time sensor detects a user’s exact location, determining whether they are indoors or outdoors, in shade or sunlight, and how much UV radiation their skin has absorbed over 24 hours.

“Then, if you’ve gone over the safe limit, the device uses Bluetooth to communicate with an app on your smartphone to send you a text saying you’ve had enough exposure and you should get out of the sun or cover up,” Dr Nasiri said.

Although some current smartwatches can report the UV index based on GPS location, the information is not personalised.

“Knowing your skin type, our sensor can calculate how much cumulative UV you can tolerate and then when you’re at risk, it will alert you immediately,” Dr Nasiri explained.

An advocate of preventative medicine, Dr Nasiri said her novel, affordable device could alert millions of people in Australia and around the world to the dangers of overexposure to the sun, decreasing their skin cancer risk.

Dr Nasiri came to Australia from Iran in 2012 on a scholarship for a PhD. She planned to research a metal alloy to build lighter vehicles, but a casual conversation with the passenger beside her on the plane from Tehran changed her life’s research direction.

“The man next to me listened while I explained what I was studying, but then told me that Australia was no longer famous for manufacturing cars. He suggested that if I was using taxpayers’ money, I should do some research that benefited all Australians.”

Once Dr Nasiri better understood Australia’s outdoor lifestyle, and the high risk of skin cancer, she switched her research and found a new PhD supervisor with expertise in nano devices.

“I had to learn a lot from scratch but deep inside I was very happy and motivated because I was doing something to give back to society,” she said.

She succeeded in developing a novel device sensitive to UV light during her PhD. “But I didn’t have an electronic background to make the device wirelessly communicate with a phone,” she explained. “So it just wasn’t very attractive to industry partners.”

Having been appointed to a lecturing role at Macquarie in September 2018, she drew on the university’s expertise and transformed the technology she had developed to make the device wearable.

Last year, Dr Nasiri and her Master’s student Tasrif Noor created a prototype and published a ‘proof of concept’. Now they’re looking for an investor to incorporate the sensor into an existing smartwatch, Fitbit, sunglasses or clothing. The device will be affordable, costing less than $20.

“We are so close to commercialising the device this year — and it’s very exciting,” Dr Nasiri said.

Image caption: Dr Nasiri hopes her nano device will help reduce the incidence of sun-triggered skin cancers in her adopted home of Australia.