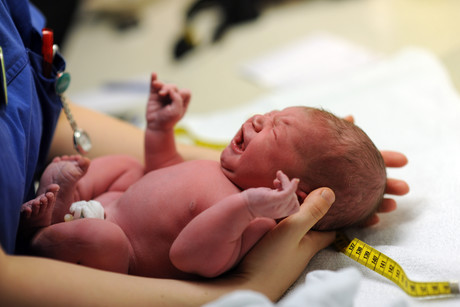 A study published in The BMJ suggests that inducing labour at 41 weeks in low-risk pregnancies is associated with a lower risk of newborn death compared with expectant management (a ‘wait and see’ approach) until 42 weeks.

Although the overall risk of death at 42 weeks is low, it is generally accepted that there is an increased risk of adverse perinatal outcomes for both mother and baby at or beyond 42 weeks of pregnancy. Some studies have suggested that inducing labour from 41 weeks onwards improves these outcomes, but there is no international consensus on how to manage healthy pregnancies lasting more than 41 weeks. Researchers in Sweden set out to compare induction of labour at 41 weeks with expectant management until 42 weeks in low-risk pregnancies.

The trial involved 2760 women (average age 31 years) with an uncomplicated, single pregnancy recruited from 14 Swedish hospitals between 2016 and 2018. Women were randomly assigned to induction of labour at 41 weeks (1381) or expectant management (1379) until induction at 42 weeks if necessary.

The main outcome was a combined measure of babies’ health, including stillbirth or perinatal death, Apgar score less than seven at five minutes, low oxygen levels and breathing problems.

Other outcomes included admission to an intensive-care baby unit, Apgar score less than four at five minutes, birth weight, pneumonia or sepsis. The type of delivery and mother’s health just after giving birth were also assessed.

For the main outcome measure, the researchers found no difference between the groups (2.4% of women in the induction group had an adverse perinatal outcome, compared with 2.2% in the expectant management group).

Other outcomes, such as caesarean sections and the mother’s health after giving birth, also did not differ between the groups.

However, six babies in the expectant management group died compared with none in the induction group and the trial was stopped early. The researchers estimate that, for every 230 women induced at 41 weeks, one perinatal death would be prevented.

They point to some limitations, such as differences in hospital policies and practices, that could have affected the results. But they say women with low-risk pregnancies should be informed of the risks of induction versus expectant management and offered induction of labour no later than 41 full weeks. The researchers concluded that this could be one of few interventions that reduces stillbirth.

Commenting on the study findings in an editorial, professor of evidence-based maternity care Sara Kenyon of the Institute of Applied Health Research at the University of Birmingham, and colleagues, said that induction at 41 weeks looked like the safer option for women and their babies. They stressed that choice is important within maternity care.

“Clear information about available options should be accessible to all pregnant women, enabling them to make fully informed and timely decisions,” they said.